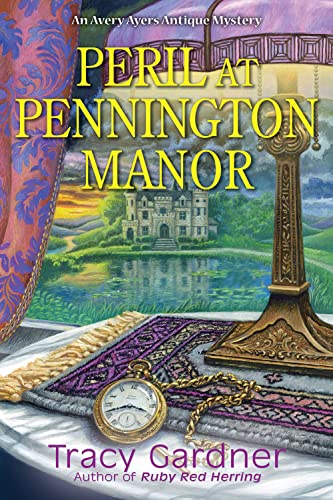 “Whether they find the true culprit or not, the reader will have fun with this hard-to-put-down book.”

In Tracy Gardner’s new cozy mystery, Peril at Pennington Manor, she introduces her protagonist, Avery Ayers, with a different career from the standard cozy heroine—antiques appraiser. Avery, with her father William and two associates Sir Robert Lane and Micah Abbot, is hired to evaluate the belongings of Duke Nicholas Pennington’s property, Pennington Manor.

A choice job and one that Avery relishes until they discover that the most valuable item in the Duke’s possession, the Viktor Petrova timepiece, is found to be missing. As Avery’s appraisal project moves forward, she discovers more original items have been replaced with fakes.

The duke is distraught to realize that someone in his close sphere—family and employees—are suspect, but his concern doubles when the housekeeper, Suzanne Vick, falls—or is pushed—off the roof to her death.

When Avery’s romantic interest, Detective Art Smith, tries to convince her to abandon the job for her own safety, Avery’s investigative skills take over, which means leaving Pennington Manor is not an option. Unlike many cozy mysteries, Detective Smith is smart and when he cannot convince Avery to leave the manor, he works with her, strengthening their relationship.

The investigation grows when it is discovered that Suzanne’s predecessor also died under peculiar circumstances. Suddenly Duke Pennington is injured in a riding accident that curiously does not look like an accident at all.

Gardner has created an interesting set of characters, well developed and three dimensional. A small side issue enters Avery’s life when her younger sister, Tillie, who is studying music in London, is suddenly dismissed from the school and is reluctant to give the details of the dismissal. Between Art’s insistence that Avery leave the manor, Tillie’s refusal to confide the details of her dismissal, and the thefts and deaths at Pennington Manor, Gardner presents excellent opportunities for conflict and tension to settle on Avery with a vengeance.

The story unfolds in a logical manner, presenting the reader with multiple red herrings, foreshadowing, and clues that will leave the reader chasing their own shadows as they try to get to the bottom of this multitude of mysteries.

Gardner even provides a set of hidden stairways in the manor, stairways that give the culprit the opportunity to move stealthily throughout the building without being discovered.

As another death occurs, Avery’s safety is brought into question, but she is not dissuaded from seeing the investigation through to its logical conclusion. The requisite climax scene is well constructed, leaving the reader scurrying through their mind to determine the identity of the culprit.

Gardner’s fans will enjoy this read as they chase around behind Avery, gathering the clues she uncovers and building their own discovery. Whether they find the true culprit or not, the reader will have fun with this hard-to-put-down book.