Performers Tell Their Stories: 40 Years Inside the Arts 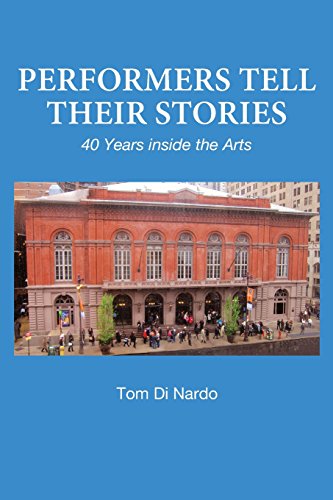 Journalist Tom Di Nardo started his career as a freelance critic at the Philadelphia Bulletin as a side gig to his day job and was later a longtime contributor the Philadelphia Daily News, carving a regular arts beat for over four decades. Although he would never admit to being a standard-bearer of cultural journalism, his readers and two generations of artists would beg to disagree.

Di Nardo may have been officially a freelancer but he had an inside track from the start. He has released two books: Listening to Musicians: 40 Years of Philadelphia Orchestra, and Performers Tell Their Stories, a compendium of interviews with singers, composers, musicians, dancers, designers, choreographers, and artistic directors. Together they chronicle the artists and their times in what is no less than a cultural renaissance in Philadelphia.

From the start Di Nardo proved his skills as an interviewer who got past any glamour and hype to get artists to talk about their creative process and artistic impulses. In the ancient days before computers, Di Nardo, a young father of three, wrote overnight reviews for the morning edition and still had to be up early for his day job.

Sitar virtuoso Ravi Shankar was performing in Philadelphia with his daughter Anoushka, and at a reception afterward Shankar remembered Di Nardo by name from one previous meeting on the West Coast and immediately invited him to come to his upcoming London tribute to George Harrison.

In the 80s, Di Nardo even independently produced composer Romeo Cascarino’s opera William Penn at the Academy of Music after hearing a taped recording of its single recital performance. Di Nardo recounts the joys and pitfalls of being a first time opera producer of what resulted in a noted and artistically successful new opera.

Many journalists are poets, but how many, like Di Nardo, are dance writers, baseball historians, and poets? When the old South Philly Shibe stadium was demolished Di Nardo went on site and immortalized it in a poem. Consider these lines:

“Standing at second base, or where it might have been /  Without a marker to Cobb or Wills or Ashburn or Brock, My childhood shrieks before me.”

In another part of the field, Di Nardo hits back at the pitiable era of newspapers in endless freefall. But rather than lament, he gives a wry peek of a journalist sticking to his standards when publishers and some editors couldn’t be bothered. His two-page essay about dealing with editors who are less knowledgeable than the writer should be required reading in every journalism course in the country.

In a time when arts are less and less valued in American life, Di Nardo investigates the indelible value and legacies of institutions based in Philadelphia including the Academy of Vocal Arts, The Curtis Institute of Music, The Friends School of Music, The Pennsylvania Ballet, Philadanco, among others.

Di Nardo makes you feel like you are in the room with these people. At times, his sometimes too casual conversational style has him bouncing from one person and incident to the next. But beyond this is a spirited panoramic view of the allied arts for this or any other season.