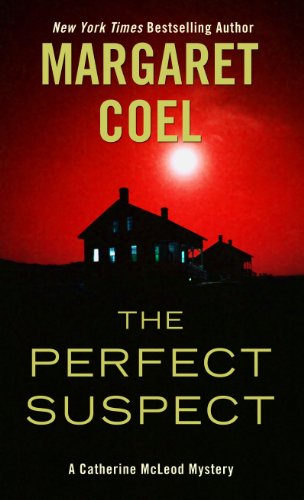 “The Perfect Suspect will have readers on edge wondering what’s around the next corner.”

As a sequel to her highly successful novel, Blood Memory, Margaret Coel has once again placed her popular character in the middle of a firestorm.

Catherine McLeod is an investigative reporter in Colorado, and she is hot on the trail of the person who murdered shoe-in candidate for governor, David Matthews. The candidate is a highly popular businessman, the quintessential pick for the top job in the state: He’s rich, handsome, and gregarious. There’s just one problem: He has a proclivity for sleeping with women who are not married to him.

From page one, the book’s antagonist, Denver Police Department Detective Ryan Beckman, wreaks havoc throughout the adventure with her cold-blooded behavior and psychotic thinking. During the course of digging for motives and suspects, McLeod becomes privy to singular information, that if revealed puts the source of that information in grave danger.

As The Perfect Suspect progresses, McLeod realizes her career and safety are in jeopardy as she probes deeper into a killing that is more complex than the police realize.

Author Coel does a good job of ratcheting up the tension in this story. The foreshadowing of violence is well done, and she gives the reader a taste of the street without overdoing the reality of the criminal world. She also illustrates how two opposing forces, rich powerful people, and the police, butt heads in a battle of wills.
It would have been nice to get a bit more about investigative techniques that were used as the detectives fleshed out and/or eliminated suspects. In this technological age, forensic examinations of computers and cell phones are at the heart of most crime solving. Nevertheless, The Perfect Suspect will have readers on edge wondering what’s around the next corner.