A People's History of Baseball 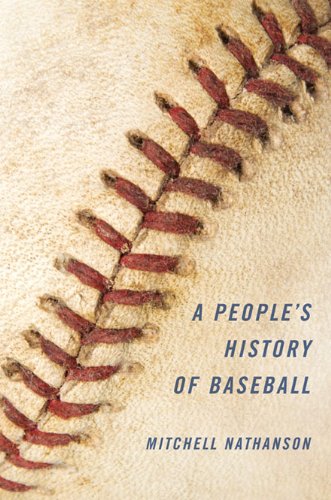 “. . . brings some balance into the picture, and fans would do well to add it to their understanding of their National Game.”

In A People’s History of Baseball, Mitchell Nathanson gives us a refreshing treat with his history of professional baseball in America as it really is rather than as the embodiment of patriotism that sportswriters like to picture it. The book is an antidote to the effusions of those who limit our understanding of the National Game by constantly reiterating vague slogans like “baseball is America.”

Major league baseball (and the author considers no other kind) is a business like many others. As such, it is an expression of power asserted by franchise owners whose initial goal was the attainment of social standing but soon became the desire to make a lot of money. Because this business is based on our National Game, MLB owners consider it special. Moreover, the government, including the judiciary, agrees, considering MLB so far above other businesses that it need not conform to every law that affects most businesses.

This peculiar situation has engendered in the club owners the notion that they are benevolent lords bestowing jobs on players, who ought to show their appreciation by agreeing to every move the owners make because whatever they did was “for the good of the game.”

For a hundred years owners used this phrase to keep the players under tight control: players had no voice in their hiring, no right to appeal, no say about where they would play or for how long, no input as to what they could earn, no notion about whether they would even play at all. The club owners shifted the players around at will and kept an inordinate share of the profits for themselves.

The author points out that MLB could also fend off every attempt at the formation of a third and competing league by using the government’s ludicrous assertion that MLB does not engage in interstate commerce and therefore is not an illegal trust.

When pro players began to realize that they had fewer rights than most salary earners, their queries brought them and their representatives accusations of being Communist or anti-American. It took a century to alter the reserve rule so that players could expect to earn free agency and begin to glean a more fair share of the profits. Since the owners finally accepted the inevitable and recognized the players’ association, along with collective bargaining, the power in MLB shifted to the players.

Like some other writers, Mr. Nathanson points out that the owners tried to sweep the Black Sox Scandal under the rug, denying that it had happened until it could no longer be covered up. He goes further, pointing out that the first Commissioner of Baseball appointed in 1921, Kenesaw Mountain Landis, refused to consider other similar cases of probable conspiracy that had occurred earlier and did little about negative events involving star players, such as the Cobb-Speaker affair.

The author, besides using his legal training to analyze MLB’s legal standing historically, does not omit to consider the trends in social beliefs that affected the club owners and the players they hired. He makes much of the theory of “positive thinking,” stating that as a result of this social trend, Americans seem to believe that just saying everything is fine will make it so, despite obvious problems, which they prefer to ignore. Many examples bear this out.

One example is the steroid situation, which MLB and its Commissioners ignored for a full decade, pretending it did not exist. Many fans expressed the same preference. Another is the way owners dragged their feet on integration, despite two decades of pressure to let excellent black players into their leagues and despite being in violation of several laws.

Even after Rickey finally introduced one black player, the pace of full integration was slow and spotty, and the owners gradually brought in only the very best black players, all of whom had to reach higher standards in their personal lives than white players did.

Mr. Nathanson’s accusations against MLB’s historical actions (and inaction) ring true. Americans prefer to think of the great statistics of star players, the thrill of watching an exciting play, and the exploits of a successful team rather than the dismal events that have punctuated baseball history.

This author’s work brings some balance into the picture, and fans would do well to add it to their understanding of their National Game.

When most writers speak of “baseball,” they really mean the major leagues. They don’t even consider the minor leagues, the independent leagues, and the thousands of amateur players. To them, major league baseball is the only baseball that counts.

Mr. Nathanson, too, falls victim to this narrow use of terminology. It’s the assumption that MLB is the only B worth considering that makes him omit a discussion of what baseball men have done to baseball playing women since at least the 1860s, when records show that girls and young women were already playing the National Game.

Every generation of women since then has produced some excellent baseball players, scorned and ridiculed by MLB (just as black players were once belittled). Those women who were legally signed to minor league contracts suffered having those contracts cancelled as soon as the Commissioner learned their gender. Women whose contracts were broken had been raised to be polite, so they felt obliged to accept this discrimination instead of fighting it.

Perhaps Mr. Nathanson’s next book will demonstrate a broader outlook and admit that MLB owners have not only suppressed the rights of male players, they have prevented members of “the other half of the population” from reaching their full potential in our National Game.