People of the Morning Star (North America's Forgotten Past) 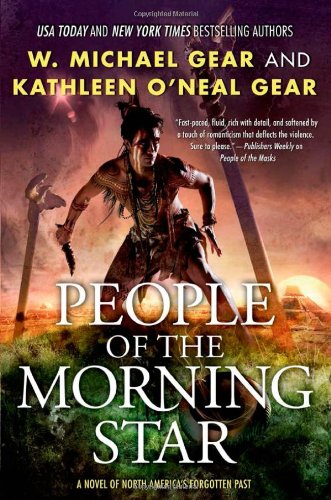 “The Gears have written an epic novel that combines the cultural history of Cahokia with the fast-paced narrative of a thriller to explore the all too human and universal dangers of greed and overweening ambition.”

It was larger than an London and Paris at the time of William the Conqueror, as influential politically and culturally in North America as ancient Rome was in Europe and the Middle East a thousand years earlier, yet few outside of archaeologists and historians have ever heard of Cahokia.

In an earlier novel, People of the River, published in 1991, W. Michal Gear and Kathleen O’Neal Gear described a city of regional importance. Drawing on recent archaeological investigation and analysis, the husband-and wife-writing team have written an epic novel that describes the transformation of Cahokia around 1050 CE from a regional center of trade and commerce to a city of more than 200,000 people than exerted influence, if not outright control, through its colonies over an area that reached from the Atlantic to the Gulf of Mexico and west into what is now Oklahoma and the Dakotas.

This transformation occurred almost overnight. The original city of Cahokia, now referred to as “old Cahokia,” was razed to the ground and the new city built. More than 200 mounds, some as tall as a ten-story building, topped by temples and palaces rose along the site of present-day St. Louis and the bluffs of Illinois and Missouri.

The question central to Cahokia is “Why?” Why the sudden and speedy construction of a new city to replace the old? Why the sudden mass immigration of peoples of different languages, customs, and cultures to Cahokia? What secret does the past still hold that will explain Cahokia’s transformation?

Michael and Kathleen Gear, professional archaeologists, propose a hypothesis that fits within the widespread contemporary belief of the time: the “requickening” or resurrection through ritual of a divine hero or god into the flesh of a living  person. Thus did the spirit of the divine Morning Star claim the body of Chunkey Boy, as it previously had claimed the body of his grandfather.

Morning Star is not loved by all. The high chief of the Deer Clan, Right Hand, remembers Chunkey Boy before he became a living god as a vicious youth, and doubts he is a god at all. But as he points out to his sister Corn Seed, Matron of the Deer Clan, “They believe it. All these simpletons who’ve flocked here to revel in the god’s presence.”

Another who doesn’t believe that Morning Star is a living god is Fire Cat, high chief of Red Wing Town, the only serious military rival of Cahokia. When Fire Cat is captured and his town destroyed, he expects to be slowly tortured to death in Cahokia’s main plaza, both for his hearsay and for his status as high chief of Cahokia’s rival.

Had not Lady Night Shadow Star, sister of Chunkey Boy and member of the powerful Four Winds Clan, descended into the Underworld and been claimed by the Panther God, Piasa, Fire Cat would have died.

Instead Night Shadow Star saves Fire Cat and he swears fealty to her. Together with Blue Heron, Clan Keeper of the Four Winds Clan, and her unlikely follower, Seven Skull Shield, thief and outcast, Night Shadow Star and Fire Cat must hunt down an evil murderer who seeks to destroy Morning Star and rule in his stead.

The Gears have written an epic novel that combines the cultural history of Cahokia with the fast-paced narrative of a thriller to explore the all too human and universal dangers of greed and overweening ambition.