People of London (Tales From The City) 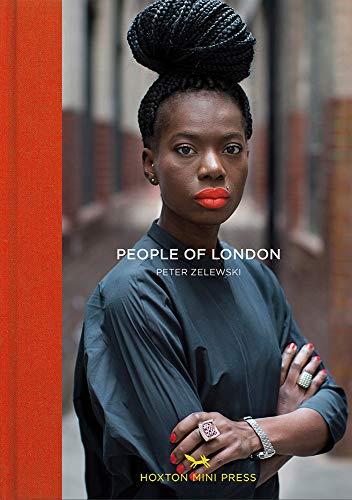 People of London is a collection of street portraiture that celebrates photographer Peter Zelewski’s passion for the city.

Born in Detroit USA, Peter Zelewski is a portrait and documentary photographer who has lived in London for some 30 years. The photos in this volume capture the regular folk he met in chance encounters on the street. In the opening comments Zeklewski notes Londoners’ willingness to be photographed, a fact that contradicts the notion of the British as aloof or unfriendly.

An eye catching orange fabric binding and striking cover photo are alluring and lead one to anticipate more of the same inside. Upon picking up this volume one is struck by the confrontational gaze of a young, stylish black woman, orange lipstick adorning voluptuous lips, and braided hair piled in a bun awarding her six extra inches in height and balanced atop her head. She peers unflinchingly into the camera lens, an unflappable posture repeated in many of the portraits.

Zelewski’s portraits are straightforward, and it is precisely this characteristic that makes them evocative. Outwardly the subjects appear stoic, indifferent. Upon further examination, however, there is a distinct emotional element that bubbles up. Readers are inspired to imagine more about these people. The out of focus backdrops that represent the London streets frame the subject in the foreground.

People of London is Peter Zelewski’s take on one of the world’s most noted cities. It’s a stroll through the streets. Each encounter demands direct eye contact, a level of engagement that city folk often avoid as they hurriedly go about their business.