People of the Book: A Decade of Jewish Science Fiction & Fantasy 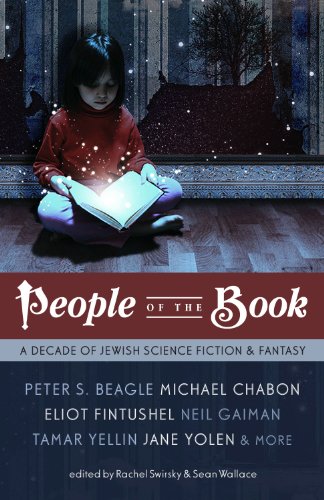 This strong and varied anthology deserves a different title, one whose first part will not be confused with Geraldine Brooks’ novel of the same name. People of the Book: A Decade of Jewish Science Fiction and Fantasy includes stories that will appeal to nearly every taste in short fiction, but the corollary is that not every story will appeal to every reader.

The fantasies greatly outnumber the science fiction stories, and the best of the former, with their dybbuks (souls that inhabit someone else’s body) and golems (powerfully strong animated statues), are the contemporary English language progeny of the work of such Yiddish language masters of the supernatural and the uncanny as S. Ansky, I. L. Peretz, and Isaac Bashevis Singer. All 20 stories, regardless of subgenre, have a somewhat elegiac tone; indeed, every story in this collection has a theme of loss.

At the end of the first decade of the 21st century the number of years that have passed since the Shoah is about the same as the interval between the two Judean wars against Rome and the duration of the Babylonian exile. It should not be surprising then, but is nonetheless striking, how contemporary imaginative writers, such as Rose Lemberg in her story “Geddarien” and Jonathan Sullivan in “Niels Bohr and and the Sleeping Dane,” arm their Jewish characters in the ghettos and countryside of occupied World War II Europe with golems and other supernatural forces to fight and hinder Nazi SS troops who are rounding up Jews.

Scientifically and theologically minded readers may enjoy the latter story’s discussion comparing the dualities of energy and matter in quantum physics with those of sephirot on the left and right sides of Adam Kadmon (the ten divine attributes found on the blueprint of the godhead in whose image humans were created) in Kabbalah. This suspenseful tale of an attempted escape appeals to both the reader’s head and heart.

“Going East” by Elana Gomel is a diary of atrocities by just such an SS officer who by the end of the story has lost his mind. In Science Fiction stories such as Benjamin Rosenbaum’s “Biographical Notes to ‘A Discourse on the Nature of Causality, with Air-Planes,’ by Benjamin Rosenbaum” and Matthew Kressel’s “The History Within Us,” (which will appeal to precocious tween boys and geeks of all ages and genders), the Holocaust is allegorized and projected onto future catastrophic conflicts. The theme of pursuit and escape is set in turn of the previous century United States in “The Wings of Meister Wilhelm” by Theodora Gross, in which a German-Jewish scientist escapes a southern lynch mob on the wings of a glider a few years before the Wright brothers’ initial flight.

The collection opens with “Burning Beard,” a midrash (ancient commentary on Hebrew scriptures) on the Joseph story in Genesis in which Joseph the dreamer and dream interpreter foresees his descendants’ enslavement, suffering, and emancipation by Moses whom he calls the Beard and toward whom he bears a jealous resentment. As the hero who saved his people and all Egypt from famine, Joseph detests Moses’ fasting, self-abnegation, and destruction of Egypt’s crops by locusts and other plagues. He is also haunted by the knowledge that had he not brought his people to Egypt they would be spared all that was to befall them in future generations.

Regrets about unforeseen consequences is also a theme in Janet Yolen’s “The Tsar’s Dragons,” in which dragons represent government directed mob violence, and an idealized Leon Trotsky, referred to by his birth name Lev Bronstein, regrets having raised and unleashed Red Dragons as ordered by Lenin to counter the Tsar’s Black Dragons.

Two stories are set in contemporary Israel/Palestine. In Ben Burgis’s “Dark Coffee, Bright Light and the Paradoxes of Omnipotence” Israel did not triumph in the 1967 Six Day War but rather was defeated in a Twelve Day War and ceased to exist. Four decades later in a truncated puppet state consisting of Tel Aviv and its suburbs newly religious Jewish terrorists plan and carry out suicide bombings against the occupying Palestinian government and its forces. In Lavie Tidhar’s “Alienation and Love in the Hebrew Alphabet” a foreign single mother falls in love with an Israeli living abroad and relocates with her daughter to his Kibbutz only to find they don’t fit in and are not made to feel welcome by both the children and the adults of the community. The story is divided into 22 lyrical sections, each of which is preceded by a transliterated letter of the Hebrew alphabet, that read like prose poetry.

Nearly half the stories in the anthology are set in the mid to late 20th century or current day United States, and some of these more closely resemble contemporary literary fiction than genre fiction. Michael Blumlein’s “Fidelity: A Primer,” for example, borrows a plot element from Tom Perrotta’s 2004 novel “Little Children” (including the married—but not to each other—opposite sex parents flirting while accompanying their children at a swimming pool), but the story has no supernatural aspect and its only science fiction element is a medical procedure that real life science has yet to accomplish.

Other stories do have supernatural plot devises, but these recall 1960s situation comedies where a character’s normal daily life accommodates a paranormal secret. In Max Sparber’s “Eliyahu Ha-Navi” a college student has to hide the prophet Elijah, whom his great-grandparents brought to America from Eastern Europe in an accordion case and had been living in a crawl space in his parents home, in his dormitory closet. In Peter S. Beagle’s “Uncle Chaim and Aunt Rifke and the Angel” an angel takes up residence in an artist’s studio and becomes his model.

Tamar Yellin’s “Reuben,” Glen Hirshberg’s ghost story “The Muldoon,” Alex Irvine’s “Semaphore,” and Michael Chabon’s “Golem’s I Have Known, or Why My Elder Son’s Middle Name is Napoleon: A Trickster’s Memoir,” all concern intergenerational family dynamics and are emotionally moving, though some more so than others.

It is not clear why Neil Gaiman’s “The Problem of Susan” is included. In it a young English woman journalist interviews an elderly English woman scholar and author (a war evacuee who may or may not be Jewish) about the latter’s recently published book on children’s literature. The two wind up talking about C. S. Lewis’s Christian allegorical novels for children. More than a few readers will wonder what makes this rather Christian story Jewish and how it fits the anthology’s genres.

Perhaps that story is the exception that proves the rule. People of the Book: A Decade of Jewish Science Fiction and Fantasy is a book that belongs in every Jewish library with an acquisitions budget and on the desk of every Jewish educator, especially those who assemble curricula, as well as readers who enjoy Jewish short fiction.