The Pen and the Brush: How Passion for Art Shaped Nineteenth-Century French Novels 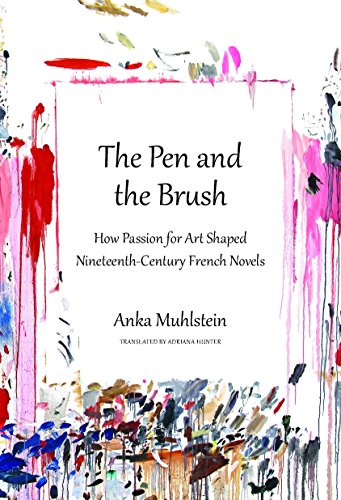 In The Pen and the Brush, the versatile biographer Anka Muhlstein explores some of the complex and fascinating relationships that have existed between painters and novelists. Nineteenth century France provides the canvas. The main subjects are four major writers—Balzac, Zola, Maupassant, and Proust—and the artists who were their contemporaries—Delacroix, Manet, Degas, and Cezanne.

One might find analogies in the mid-20th century, when American poets and novelists like Allen Ginsberg, Jack Kerouac, and John Clellon Holmes were inspired by jazz musicians and wanted their work to have all the force of a saxophone solo. The French nineteenth-century landscape and portrait painters were the predecessors of jazz artists such as Charlie Parker and Miles Davis who made writers jealous of their talents and envious of their cool.

Muhlstein carves out a subject well worth study; Adriana Hunter does a capable job of translating her French into sturdy English.

Unfortunately, Muhlstein only writes about Frenchmen and does not include French women. The omission seems glaring. The author could have thrown a much wider net and encompassed Amantine-Lucile-Aurore Dupin, better known as George Sand, as well as Sidonie-Gabrielle Colette, who published under the name Colette and who was the subject of many a portrait and photograph.

Had Muhlstein written about Sand and Colette we might know if 19th century French women writers related to painters differently than their male counterparts.

The author of a double biography about Elizabeth I and Mary Stuart as well as studies of Marie De Medicis and Anne of Austria, Muhlstein certainly knows that women played major roles in European history for centuries, which makes the absence of women writers in her new book all the more noticeable.

The Pen and the Brush adheres to the thesis that “writers took inspiration from the painters’ vision.” At times, it can feel narrowly academic and a bit tedious, especially when the author provides detailed plot summaries of 19th century novels such as Zola’s The Masterpiece and Maupassant’s Strong as Death that are no longer as well known as they once were.

Still, Muhlstein tells a riveting tale. She provides closeups of writers who rubbed shoulders with painters, and she also pulls back, looks at the big historical picture, and traces the shifts from naturalism to impressionism and cubism, and from the French Revolution to the start of the 20th century. It’s an intriguing subject that Muhlstein tells from several perspectives.

The book begins dramatically. The author explains that Napoleon’s armies seized paintings by Rubens and Rembrandt, brought their huge canvases back to Paris where they were exhibited in the Louvre and where workers as well as aristocrats feasted their eyes. “The French justified this plunder by claiming that these treasures would now belong to the people rather than to foreign despots,” the author writes.

Muhlstein takes a brief look at the Dreyfus Affair that shook up French society from 1894 to about 1906 and that prompted Zola to write his famous “J’accuse” essay in which he denounced endemic injustice. Cezanne, Degas, and Renoir all sided with the government and not with Dreyfus, who was wrongly accused and vigorously persecuted.

Lighter moments punctuate the narrative. Muhlstein explains that the famed short story writer, Maupassant, bought a boat for Zola and named it Nana, after one of Zola’s most famous characters, a streetwalker who becomes a high-class prostitute. “Why Nana?” Zola asked. “Because everyone will get into her,” Maupassant replied.

The last section, which focuses on Proust, Ruskin, Vermeer, and Whistler, comes alive, perhaps because their stories are closer to modern times, and perhaps because Vermeer’s Girl with a Pearl Earring, which inspired the author of In Search of Lost Time, is so well known today. Indeed, it prompted the 2003 movie about Vermeer and the servant girl in his household, who might have served as his model.

But that’s a chapter for another book. Indeed, what painting did for writers in the 19th century, motion pictures did in the 20th century.

In the conclusion to The Pen and the Brush, which seems in some ways misplaced, Muhlstein argues that French 19th century artists upended centuries of tradition and spurned “great subjects,” while “writers sought to establish literary equivalent of pictorial achievements by taking into consideration effects of light and color.” That information might have been put to better use in the Introduction.

The Pen and the Brush should appeal to devotees of 19th century French fiction and art. The author is passionate about her subject and it shows. Page after page, she brings to life the literary gods—Balzac, Zola, Maupassant and Proust—who reinvented fiction. Moreover, she celebrates the glories of the Louvre, the museum that has preserved masterpieces of European art and that has prompted generations of wannabe writers, painters, and sculptors to follow their dreams.

Above all, perhaps, this is a book that’s meant for museum lovers. The illustrations from works by Cezanne, Delacroix, Manet, and Whistler provide The Pen and the Brush with added pizzazz that’s hard to resist.