The Peerless Four: A Novel 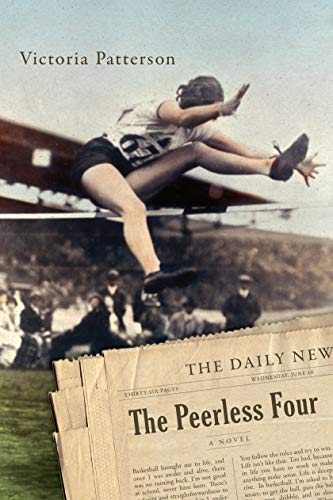 Ever since the runaway success of Erik Larson’s The Devil in the White City a decade ago, there’s been a steady stream of books that straddle the line between the fiction novel and historical narrative. These books are written by authors who are well grounded in the documentary history of their subject but are also willing to fictionalize the historical record in the interest of telling a good story.

The newest entry into this genre-blurring body of work is Victoria Patterson’s The Peerless Four, a fact-based but fictionalized story of the four women sprinters who won the Gold Medal for Canada in 1928. Concurrently, the book is about the sexism they faced heading into the first Olympiad to permit women.

Ms. Patterson selected a fascinating topic and characters. In the book’s first 20 pages, she establishes the four women who would become the “peerless four” and the pervasive sexism these women faced. She also grounds the book in fact. Some of the most powerful moments of The Peerless Four are the nonfiction sections, including a Toronto Daily Star editorial that begins: “No female should be seen swaggering around pretending to be male. If females must be allowed in the Olympics, they should be consigned to participating in lady-like sports that allow them to look beautiful and wear pretty cute costumes.”

While Ms. Patterson may be most passionate when exploring sexism, she also does a fine job of chronicling life in 1920s Canada, a rural country of modest farmsteads. Ms. Patterson’s depiction of Canada is that of a conservative country, several hundred miles from the flappers and speakeasies of the U.S. and several decades away from the broadminded and prosperous country of today.

Ms. Patterson writes with the short sentences of a journalist. The following description of the ship that carried the Canadian athletes to the Olympics is a good example:

“The entire ship was transformed into a large gymnasium and it was something behold: Promenade decks covered with cork to make a track, a boxing ring and fencing strip, a place for calisthenics. The pistol team had target equipment to set up. There was a small canvas pool where the swimmers swam from a rope anchored above. The javelin throwers used javelins with ropes attached and threw them out to sea, dragging them back.”

Throughout the book, Ms. Patterson alternates between narrators. Many times, the narrators are the women athletes. Alternating narrators has the potential to add rich perspective to a novel (Richard Kramer’s These Things Happen is a good recent example).

But in The Peerless Four, there may be too many narrators and not enough clues about who is narrating. The result is that The Peerless Four is muddled at times, and readers may struggle with keeping the names and perspectives straight. A short introduction to each chapter would have helped.

Few stories are as enduring as the underdog athlete beating the odds to “win it all.” With The Peerless Four, Victoria Patterson takes readers down this well established path but with the added dimension of exploring sexism in a historical setting.

The Peerless Four may be more about the straight-jacket faced by “lady athletes” in the early 20th century than plucky underdogs winning it all. But either way and despite a few flaws, this is an interesting and fun little book.