Peel Back the Skin: Anthology of Horror Stories 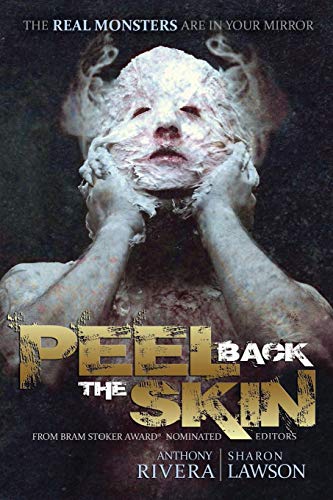 Is there poetry after Auschwitz? Is there horror after the massacre in Orlando? Peel Back the Skin: Anthology of Horror Stories, edited by Anthony Rivera and Sharon Lawson, reveals why horror is necessary today.

On the front cover the headline reads, “The real monsters are in your mirror.” (The words “real monsters” bolded.) This anthology dares to plumb the darkness within humanity, the darkness the same humanity works diligently to hide, disguise, and justify. The litany of bad news seems endless: mass shootings, the Syrian refugee crisis, Martin Shkreli's obscene mark-ups on AIDS medications, and American racism and misogyny. Where does horror fit in? Why even bother with the genre when the evening news is horrific enough? Intentionally reading more horrific material would appear like a masochistic enterprise.

Rivera and Lawson are both Bram Stoker Award nominated editors. They have curated a collection of horror stories with a multifaceted scope. While the horrific activities of humanity create a through-line, the stories range from the supernatural to the all too real.

“The Shed” by Joe McKinney focuses on Thom Campbell's estranged relationship with his twelve-year-old daughter Megan. McKinney's detached prose reads like objective, clinical journalism. The story unfolds with Megan's random outbursts of screaming. Then Thom spies the daughter spending time in the shed, her activities taking on a perverse regimentation, so at odds with her chaotic behavior. But Thom soon realizes the heart of the problem. This realization becomes evident when the family dog goes missing.

“Mystic” by Jonathan Maberry has a bounty hunter track down a rapist. The hunter describes the victim, “Little thing, no bigger than half a minute. Sixteen, maybe seventeen. Slim as a promise. Pretty as a daffodil.” She also happens to be a ghost. Maberry seamlessly blends together a dark magical realism with a hard-boiled noir sensibility. As if a Neil Gaiman protagonist walked into Frank Miller's Sin City comics. “The night was hung wrong. The buildings leaned like drunks and the moon hid a guilty smile behind torn streamers of cloud.” The story is vulgar, violent, and vicious. The girl gets her justice, but at a cost both to herself and the bounty hunter. Even when the scales of justice are righted, the psychic damage remains like a scar.

“The Protector” by Tim Lebbon is told from the perspective of a lonely bookish teen. Raised in a dysfunctional family, he hides in books. The fantastic stories give him solace as he tries to block out the fury and violence of his drunken father's domestic and verbal abuse. “Get yourself a life. A life! Not bloody reading. Sitting in bed reading when you should be . . .” The scenes of abuse alternate with the narrator's heroic acts in fantasy landscapes. “There is a forest here, but it is not made of trees. Heavy timber spikes driven deep into the ground bear wretched fruit. Some are still recognizable as people, flesh rotting, hair still clinging onto scalps like the desperate might cling to life.” On a return trip home from college, the narrator finally confronts his father. For all his reading about monsters and demons, the real monster in the situation presents itself. Despite the damage he caused, his father is revealed as nothing but a defeated shrunken coward.

Peel Back the Skin investigates the horrific behavior of humanity, but does not revel in it. The entertainment is dark and pulpy, but never exploitive. On occasion, horror will offer the transgressive thrill of experiencing acts otherwise condemned by law-abiding society. The horror genre provides an opportunity to explore this dark terrain, although it lacks the hubris to offer any diagnostic solutions. The human penchant to murder, mutilate, and massacre is housed deep within the species. Psychologists, social scientists, and historians have all tried to understand it. Yet it is the arts and literature, especially the horror, that can provide the clearest window into humanity's near limitless capacity for self-destructive acts.