The Peculiar Miracles of Antoinette Martin: A Novel 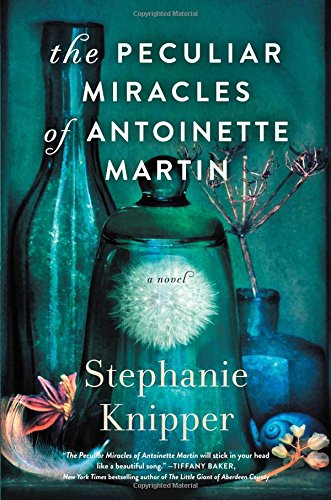 Antoinette Martin is special. At ten years old, when many tweens are lost in the joys of the Internet and discovering the opposite sex, she has encyclopedic knowledge of classical music and a good eye for the great masters of art. She is also nonverbally autistic, with a powerful gift.

The Peculiar Miracles of Antoinette Martin is a compelling novel of family and devotion. Debut author Stephanie Knipper introduces Antoinette first through the eyes of her mother, Rose: “I can pretend I don’t notice her eyes, a finger’s breadth too far apart. Her arms are relaxed, not held tight against her shoulders as they are most of the day.”

Though autism does not always involve physical challenges, Antoinette is not one of the lucky ones. She walks, “marionette-like, arms cocked, hands curled toward her chest, knees bending and popping with each step.” Antoinette will clearly need care and attention for the rest of her life.

Rose herself is in a bad way. A heart condition she developed while pregnant with Antoinette is worsening rapidly. Desperate for help with Antoinette, she contacts her estranged sister, Lily.

The sisters are forced to face their pasts and their fears as they reconnect. They also have to come to terms with Antoinette’s gift of healing, because it comes with a high price.

Knipper has done a bang up job with this novel. She writes beautifully of her Kentucky setting and the flower farm the Martins have owned for generations: “The land there was draped in Kentucky bluegrass and rolled like soft ocean waves. . . . Nestled among them, Eden Farms was a burst of color. In summer, the fields behind their farmhouse were a crazy quilt of purple, pink, yellow, white, and red. [Lily and Rose] used to pretend they were fairies, the fields their kingdom.”

Her characters, too, are thoughtfully written. Rose’s pain and panic at the prospect of leaving her child in death is palpable: “Dying feels like that. Except you’re losing everyone you’ve ever loved at once.” Knipper doesn’t stint on description of how devastated Rose was when Lily left her alone with a profoundly handicapped child after the deaths of their parents in a traffic accident, but she also does a nifty job of creating a situation and dialogue that makes Rose’s forgiveness of her sister believable.

Lily is a tricky character. Knipper first shows the reader a woman who is tightly controlled and not altogether likeable. She “lived a cautious life,” and is not immediately moved by her sister’s plight. As her story unfolds, though, Lily is revealed to be a woman who is very alone and very scared, trapped in her own compulsions. Her fear of Antoinette’s disability is made understandable.

Antoinette herself is heartbreaking. Knipper takes the reader inside her titular character’s head: “She could name Bochmann’s Lark Ascending from the first trill of the violin. She could close her eyes and re-create the crooked grin of Leonardo DaVinci’s Mona Lisa or the slope of the hill in Wyeth’s Christina’s World, brushstroke by brushstroke in her mind.” She is revealed as a bright, engaging child who is just as trapped by her body and her impulses as her mother is in her situation.

Though Antoinette’s “peculiar miracle” is the raison d’etre for this story, the characters themselves and the situation enveloping them outside of Antoinette’s healing power are reason alone for this book’s existence. The promotional materials for this book disclose that Knipper is herself a mother of a severely disabled child, and her understanding and compassion for those children and the difficult but rewarding situation in which their parents often find themselves is obvious.

The only slight detraction from the beauty of this story is the conceit of the “Rose’s Journal” sections, used to flashback from the current day timeline. As popular as this current literary trend might be right now, it does not work for this novel. The selections are not written in journal form; though the do have personal observations, they are written in present tense and detail minute by minute activities, as if Rose was writing them as events unfold. The unlikeliness of her, for example, writing a diary entry as delivering a painting to her neighbor, Seth, pulls the reader out of the narrative. Much of the information in the flashbacks is unnecessary to the main story, and those bits that are crucial would have been better handled if incorporated into the main storyline.

Regardless, The Peculiar Miracles of Antoinette Martin is a lovely story of family and love, with a few miracles mixed in. “It’s hard being different, and I thought that being around Antoinette would make my . . . quirks more pronounced,” Lily confesses. “You know what it’s like to be on the outside looking in. You know that ‘different’ doesn’t mean broken. Antoinette needs someone who will tell her that,” Rose replies.

Stephanie Knipper might be writing about one autistic miracle worker, but there is an underlying message that Rose’s answer might just apply to everyone.