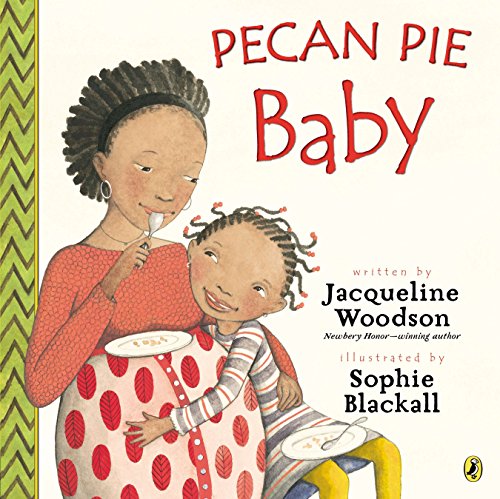 The cover of Pecan Pie Baby shows a pregnant mother with a young girl in braids hugging her round belly as both finish up what appear to be crumbs on their plates. Sweet, right? But the cover is just a snapshot of the ending of the book and does nothing to inform the reader of the complexity, thoughtfulness, and verve of the interior spreads, both in terms of text and illustrations. It’s sweet, but not a just representation of the book’s content.

Jacqueline Woodson has written a lovely tale about a little girl’s conflicting emotions surrounding her mother’s pregnancy and the impending arrival of a newborn whom she believes will disrupt the unique bond she shares with her mother. “Some days I sat on my stoop thinking about all the years it had just been me and Mama.” You feel her fear of change, and the author does not render it milquetoast by cutesifying it away or dismissing it as unfounded. It’s true: Their life as a twosome is going to be shattered despite all the extended family surrounding them.

Family that fusses over Mama, spends too much time assembling a crib in her room, and tries to foist screaming new babies on her:

“When my cousin came to visit with her new baby, she put the wiggly thing in my lap and said, ‘You sure are ready to be a big sister, aren’t you?’

“‘Not really,’ I said, handing the crying baby back to her.”

It gets so bad that the protagonist starts referring to the impending imposter as “that ding-dang baby.” So much so that one night at dinner when everyone is making plans for when the baby arrives, she yells out: “I’m so sick of that ding-dang baby!”

Of course, she’s sent to her room where the talented illustrator, Sophie Blackall offers up the best presentation depicting solitary suffering that I have ever seen. On one side of the spread is the text, spare and telling: “Upstairs, I got that teary, choky feeling. And even though there were a whole lot of people in my house, I felt real, real, real alone.”

On the other side of the spread is a bird’s eyeview of the little girl in her bedroom, on her bed, curled up, in the corner of the room, an edge of the baby’s assembled crib exposed—so that we know her space is being invaded as well—and a tree with leafless branches visible outside the window adding pathos to the solitary, cold feeling of her loneliness.

Don’t get me wrong. There’s a lot of humor in the book, and it ends well. But here, in Pecan Pie Baby, the most important contribution Ms. Woodson has made to children’s literature is to depict a child’s emotion in all its true depth and realness.