Peanuts, Pogo, and Hobbes: A Newspaper Editor's Journey Through the World of Comics 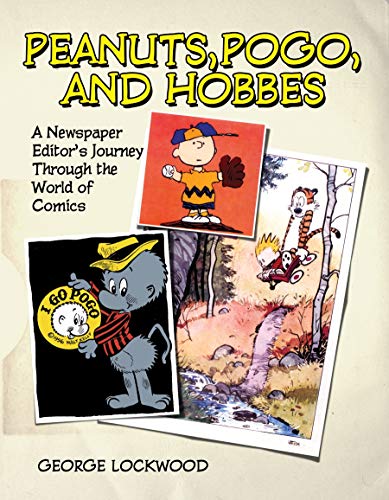 “No fan of comics and American history can afford to pass up Mr. Lockwood’s story, observations, and experience.”

When George Lockwood was young he developed an eye infection. It was so serious that he had to be hospitalized and given a shot of penicillin every three hours. While the threat of blindness hung over him he only had one overwhelming concern: Would he get back home in time to find out if Dick Tracy was able to track down and arrest Breathless Mahoney for stealing $50,000 from her mother?

That’s a comic fan! Seventy years later Mr. Lockwood’s love of the art form comes through in every word he writes. Mixing history, opinion, and experience as both an editor and a teacher into the story he has created—a wonderfully warm and knowledgeable take on the history of American newspaper comic strips.

Peanuts, Pogo, and Hobbes is filled with incredible reproductions of many classic strips. There is also a good helping of original art and seldom seen pieces such the advertising used by syndicate salesmen to promote the newest comics.

His writing on Calvin and Hobbes, the work of Milt Caniff, Pogo, and many other strips is insightful and entertaining, while showing us something new to thrill even the most experienced fan and reader.

The Golden Age of newspaper comic strips coincided with Mr. Lockwood’s youth. America was coming out of a depression and gearing up for war. This was a time when even small cities had a minimum of two newspapers, each one often publishing multiple editions throughout the day.

Radio was seconds away from becoming the dominant form of communication, but America was a nation that prided itself on literacy and most of its citizens picked up at least one paper a day. Those papers held something for everyone. Many found their favorite part in the back of the papers on the comic pages.

He had his favorites, Terry and the Pirates, Dick Tracy, and Blondie to name just a few; he was also familiar with everything that appeared in newsprint. But there was a drawback: comics were often considered by others less than acceptable reading material.

His mother, a schoolteacher herself, wasn’t shy about sharing her opinion with her son. And others believed that comic were okay for kids but they should be something grown out of.

Still, even with this amount of intellectual disdain comics were so beloved by the public that during a 17-day newspaper strike, the Mayor of NYC went on the radio to read them out loud to his constituents. Mayor F. LaGuardia began his broadcast by saying, “Now, children, I know you’re all disappointed today that you didn’t get the funnies, so gather around.” The assumption was that anyone over the age of 14 didn’t care.

As Mr. Lockwood’s new book reminds us, this assumption has been proven incorrect time and time again. For GIs and every day men and women actually loved comics as much as any 14-year-old kid. And few readers passed on a chance to read about the exploits of Blondie and her family or the trials of Steve Canyon.

While some may have looked down their noses at comics, others found strength and greatness in what they read. Mr. Lockwood quotes famed Italian film director Frederico Fellini about the impact Flash Gordon had on him when he was young. “Italy was navigating in full Fascism . . . Flash Gordon appeared instantly as a model of a hero . . .” The American as liberator—even if it was from the oppression found on the far away planet Mongo.

One of the highlights in this volume is the author’s many encounters with artists over the years. When he writes about Pogo he brings the joy of Kelly’s creative passion to life. His time with Schulz, the creator of Peanuts, is especially notable for the artist’s frankness and professional respect for others in the field.

When he became a features editor for The Milwaukee Journal Mr. Lockwood had the enviable job of picking the strips for both the daily and Sunday editions. This experience adds tremendous detail and insight to the evolution and eventual decline of the comic strip in newspapers. He tells the story of why Caniff drew left handed and how General Patton felt about Bill Mauldin’s Willie and Joe.

From the front of the editorial lines he tells of how he dealt with the public outcry over Doonesbury’s portrayal of an unmarried couple in the same bed or two decades later the appearance of a character coming out of the closet in For Better or Worse. Or why he rejected Garfield when it was first offered. In every case Mr. Lockwood is unflinchingly honest about the decisions he made.

As he writes you become aware that without saying so, Mr. Lockwood is also describing the decline of the newspaper as well as about the comic strip as an art form. He speaks openly about the changing ways that artists create their new work—this includes the changing standards of the reading public.

The world of newspapers may be shrinking and even close to disappearing, but Mr. Lockwood’s history of the medium he loves brings the best of those times to clear and brilliant life. No fan of comics and American history can afford to pass up Mr. Lockwood’s story, observations, and experience.