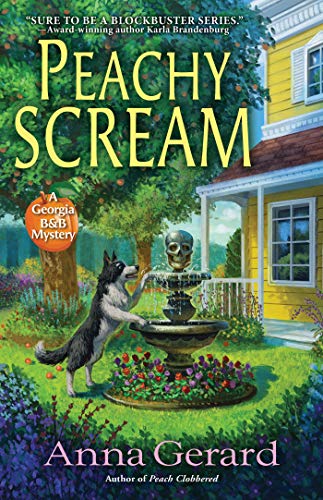 “Anna Gerard’s cozy mystery, Peachy Scream, is a fun read. . . . Her writing style flows easily with some humor sprinkled throughout the story.”

Shakespeare in Georgia! Who’d a thunk it? But that is exactly what happens every year in Cymbaline, GA, when the town holds its annual Shakespeare Festival.

As Nina (NINE-ah) Fleet prepares Fleet House, her local B&B, for the festivities, her guests arrive. GASP (Georgia Amateur Shakespeare Players) has been engaged to perform Hamlet and they have chosen Fleet House as their abode for two weeks.

Nina does not understand why her particular B&B has been chosen until the guests arrive in their bus. Much to her chagrin she discovers the director of the troupe is one Harold A. Westcott III, aka Harry. This is not her first encounter with Harry. Nina had purchased her home from the estate of Harry’s Aunt, much to Harry’s annoyance, as he expected to inherit the house and made a first legal attempt to get it several months earlier. Now GASP has taken up residence and Nina can’t help but wonder about Harry’s reasons for recommending Fleet House to the troupe.

But here she is and here they are. The troupe consists of two couples: Len and Susie Marsh; Tessa and Bill Benedict; and three single men, Marvin Lasky, Chris Boyd, and Radney Heller; and of course, Harry.

At first glance they seem to be a well-liked group whose love of Shakespeare is the glue that holds them together, but it doesn’t take long for Nina to see cracks in their façade. Within days of their arrival, and a week and a half before their performance, a crisis occurs when Len Marsh, aka Hamlet, is found dead in the garden behind Fleet House.

The troupe puts forth a solid front: It must have been a heart attack! But pieces of the puzzle start to fall into place, and Nina wonders if that could truly be the cause of death. Her fears become reality when she discovers Len’s champagne glass containing a strange residue. Taking her concerns to the local coroner/funeral director, the contents of the glass turn out to be a drug that caused his death. And now Nina has a houseful of guests, each of whom could be a murderer.

Nina does not believe Harry is a suspect, and although he is reluctant to listen to her thoughts about how Len died, he agrees to help her find the truth.

And apparently there is more than one truth for her to find. Motives seem to fall from the sky. Perhaps Len was not as well liked as the troupe would like Nina to believe. And with a little investigating on her part, she discovers that secrets abound through the troupe; some are even secrets kept from each other.

With Harry’s help, Nina constructs a new “play-within-a-play” in the Hamlet performance—an alteration to the original play and one that they share with none of the other GASPers. It is designed to bring out the true murderer.

Anna Gerard’s cozy mystery, Peachy Scream, is a fun read. A typical cozy without visual violence or gratuitous sex, Gerard presents a tale that is well written and a quick read. Her writing style flows easily with some humor sprinkled throughout the story.

The one soft spot in the story is Harry. Nina’s fear that Harry is going to try, once again, to wrest ownership from her never comes to pass. One has to ask why Nina would look to Harry for help in solving the murder if she really thinks he’s out to take away her B&B. There is also the question about why Harry is not a suspect. That having been said, however, the story flows well, the various characters are presented with strong motives, making Nina’s task all that much more difficult and interesting, and there are no side trips to detract from the story.