Peace, They Say: A History of the Nobel Peace Prize, the Most Famous and Controversial Prize in the World 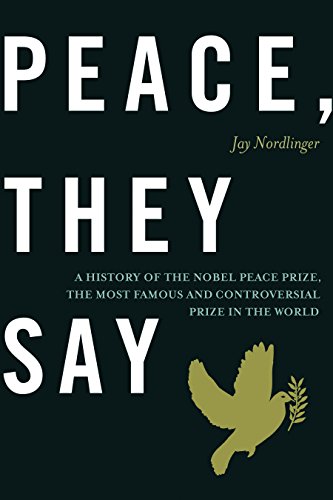 “Peace, They Say makes us consider the complexity of war and peace. The fact that the Nobel Peace Prize is still so highly valued speaks to a yearning the world over for the absence of war—and the ongoing struggle for lasting peace.”

The very title of Jay Nordlinger’s book about the history of the Nobel Peace Prize—Peace, They Say—implies that the naming of the person or entity to be honored is the source of controversy, a matter of opinion—Peace or So They Say. Little wonder since the very definition of peace and peacemaker varies from person to person and nation to nation.

Add to the ambiguity of the word “peace” the fact that the Nobel Peace Prize is considered by many to be the highest honor in the world, and you have to wonder how the Nobel Committee ever manages to reach a decision.

A committee of five Norwegians votes on a person, sometimes two, who have been effective peacemakers in the past year somewhere in the world. Organizations like the International Red Cross and the American Friends Service Committee have also been recipients.

There has been enough controversy for author Jay Nordlinger to fill over 400 pages with historical intrigue about the people who have been chosen as well as those who have done the choosing. “A history of the Nobel Peace Prize is, in a sense, a general history of the world from 1901 on,” writes Mr. Nordlinger; certainly the last century and the first decade of the 21st century have been punctuated with war and strife and noble efforts to end it.

The author’s style is conversational rather than literary, and the book reads like a talk, starting with a brief history of Alfred Nobel, a Swedish scientist and humanitarian whose family fortune was founded on the invention and proliferation of dynamite—considered ironic by many but not by Dr. Nobel.

Dynamite had advanced civilization, in his view, by simplifying the construction of roads and bridges, which connected isolated communities and assisted trade and food production. From its very origins, the reader can see that there are ironies not always evident in the progression of civilization and honoring those who advance it.

Dr. Nobel’s intention was to acknowledge and advance the work of person who had worked for world peace in the year prior to the person’s naming.

One of the most controversial laureates of all time was career military officer—the only one ever awarded the prize in its history—General George Catlett Marshall, creator of the European Recovery Program, known universally as the “Marshall Plan.”

During the war General Marshall was Army Chief of Staff. But in the aftermath, he was the man perhaps most intimately acquainted with the scale of the horror and destruction and was also the main architect of Europe’s rebirth.

Mr. Nordlinger tells the story of General Marshall’s attendance at the coronation of Queen Elizabeth in 1953, six months before receiving the prize. He was attending the coronation of Queen Elizabeth II, as the American representative. “When he entered Westminster Abbey, unannounced and, as usual, unassuming, the entire congregation rose. Marshall, aware that people were standing, looked around to see who had entered. It was he.”

Peace, They Say contains some gems of historical irony that illustrate the controversy of the very word peace. Mohandas Gandhi, the 20th century international icon of peace, was never awarded the prize, although he was nominated several times, a fact of some continuing embarrassment to Nobel followers, writes Mr. Nordlinger.

Why Gandhi was never chosen remains a matter of speculation: Perhaps Norway didn’t want to offend England during the Gandhi campaign against British colonialism and their ally during World War 2; maybe the committee did not want to appear to take sides in the bloody dispute between Muslims and Hindus after the partitioning of India and Pakistan. Peace, They Say could have benefited from more delving into the archives for specific positions on this issue, maybe arriving closer to the truth of why Gandhi was repeatedly passed over.

One of the most recent controversies was the awarding of the Prize to President Barack Obama, in office less than two weeks before being nominated.

Mr. Nordlinger claims the Obama award was an “anti-Bush” act. His explanation is that the Nobel Committee is prone to award progressive-minded individuals with a perceived worldview more in line with the European model of social democracy, less libertarian and conservative than U.S. policies.

The award to President Obama, seen as a symbolic fruition of a previous Nobel laureate’s (Dr. Martin Luther King’s) struggle for human rights, was a sign of the relief that Europeans felt upon his election, writes the author. Obama represented European hopes for a new era of international relations based on reason and not fear.

Even so, some Norwegians expressed some embarrassment at what they considered was a premature award. The author quotes Nils Butenschon, director of the Norwegian Center for Human Rights at the University of Oslo: “It seems like the committee wanted to award the prize to the American president to confirm the status of the prize rather than the worthiness of the candidate.”

Mr. Butenschon wondered if the Nobel Committee gave the award to President Obama in order to benefit from the international euphoria his election created.

Lech Walesa, Polish laureate in 1983, defended the committee’s decision in an interview with the author:

“The wise men of the committee gave the award to Obama for his potential merit and to encourage him not to stray from a path of peace.”

Two weeks before traveling to Oslo to accept the prize Obama announced that he was sending 30,000 additional troops to Afghanistan.

For those wanting a straightforward history of the prize, its recipients, and how the laureates are chosen, Peace, They Say is an important and valuable reference. Readers intrigued by the stories, however, might yearn for more of the more backroom “he-said she-said.” That would make a good sequel as the author would now be freed from having to write something about each laureate.

Peace, They Say makes us consider the complexity of war and peace. The fact that the Nobel Peace Prize is still so highly valued speaks to a yearning the world over for the absence of war—and the ongoing struggle for lasting peace.

Kathy Hersh lives in Miami and writes on a wide range of subjects from environmental sustainability to bullying prevention. Her work has appeared in The Miami Herald, Mother Jones, and Woman’s Day. She is the producer of Michener at Work, a documentary about James Michener, which focuses on his research and writing process.