Pay Up: The Future of Women and Work (and Why It's Different Than You Think) 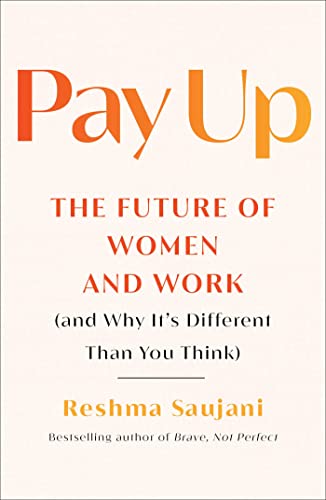 Unless you were cryogenically frozen for the last few years you are probably aware of the meltdown of schools, childcare, and workplaces during the Covid-19 pandemic. Reshma Saujani cleanly clears up any of the rubbish left laying around regarding the lack of social supports for families in this country. With a rapier she slices through the layers of misconceptions about the true burdens of raising families for women. If men do anything with children, wow, they are complimented, but women who are less than perfect are skewered in the court of public opinion.

Twenty-four percent of mothers in the United States are single moms without a partner and half of all black mothers are going it alone. Saujani states, “But the grim facts are clear; No matter how much women earn, where they live, or what political party they vote for, they still end up doing twice as much housework and child-rearing as their male partners. And although it’s killing us, we’re supposed to act like that is OK.”

“I grew up as a latchkey kid of two working parents who could not afford a babysitter, so I appreciate how extraordinarily privileged I am as a parent to have the resources to secure help in any capacity at all.”

Saujani really rips off the Band-Aid in this one, “As I walked past Nihal [her husband] asleep on the sectional cradling the remote, he stirred and, likely seeing my exhaustion, mumbled using his affectionate term for me, ‘Munch you okay?’ Not trusting myself to speak (or rip into him like a she-bitch from hell), I nodded silently and continued on to our bedroom, where I popped a 5 mg. CBD gummy that did little to allay the rising panic.”

But the reader should note that Saujani’s experience is not meant to be the gritty existence of the “other half,” those who can’t afford to take more than a couple of days off for maternity leave, let alone the month that she decries for her second child. But she does hammer home some universal points with a pile driver.

“Twelve million women were forced from the workforce during the pandemic because of the lack of childcare.” Where is their compensation? She also builds a compelling case that raising a family is a job, and if a woman also has a paying job, she is essentially working two jobs. Compared to men who contribute to childcare, who only have 30 percent of a second job. Yet the workplace in America is geared for men, not for humans with wombs, not for those who assure the continuation of humankind, hence the hostility. Man can be heard blathering that women have an obligation to have children, but where is society’s obligation to provide affordable childcare, healthcare, or even a nondiscriminatory workplace?

Of course, some men would prefer that women really were contained in the home and thus heard from even less, but fortunately the nation cannot run, much less prosper without women. From health care, to childcare, banking, and education—these industries can’t function without women. And although a few Fortune 500 companies have figured this out and have adopted family friendly work options, without government mandates this is unlikely to spread throughout the private sector.

“American families earning the median income of $87,737 spend 10.6% on childcare (for one child). Single parents-of which this country has the highest percentage in the world-may spend up to 37%.” Of course, this disparity means the single parent household mothers probably can’t save as much money for retirement, emergency funds, or luxuries like vacations. And while they make trips to the food banks, Ron Johnson, Senator from Wisconsin proudly states, “No I don’t want to take care of other people’s children.” Well, isn’t that what an advanced society is supposed to do–look out for the vulnerable and invest in the future? Or is the U.S. in decline, a once great nation that just doesn’t get it?

The all-female calvary comes to the rescue with Suajani’s Marshall Plan for Women, which includes: mandatory paid time off for maternity, paid time off for family illness, educating people on the anti-mom bias in the workplace, government supports for affordable childcare for all, and a minimum monthly income for moms. Hey, maybe if we take even some of these steps America will make mothering more popular and the nation can prevent the cratering of its population replacement rate.