The Pawnbroker: A Novel 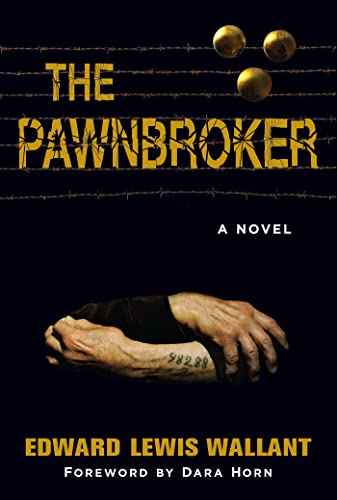 The Pawnbroker is a haunting, powerful book about the vast gamut of human behavior, including some of the darkest moments in human history. But it’s not a book about the Holocaust.

It’s about the cognitive destruction of a Holocaust survivor. It’s the haunting story of a man named Sol, so embittered by life experiences that he has become immune to any form of human sympathy, compassion, or love. He lives in constant desperation, unable to find a release from horrific dreams and equally powerless to form a singular bond of tenderness with another person. He lives in bitterness.

Before the Holocaust, Sol Nazerman is a university professor in Poland. He survives the Holocaust; but his wife, daughter, and son are murdered in Nazi camps. His mind, having been decimated by loss, brutality, and cruelty, tilts upon the verge of collapse. Sol settles in New York and becomes a pawnbroker in Harlem. Here he survives, but with a personality so broken by pain and suffering that he repels everyone.

Day after day, the wretched poor of Harlem flow in and out of Sol’s shop, begging for a few dollars from the depressed and broken pawnbroker for owned and stolen artifacts. Already severely depressed, Nazerman falls into even greater despair from the wretched display of broken lives that flow into his pawnshop.

Wallant is an extremely gifted writer, producing a taught, flowing story replete with unforgettable characters and personalities. Had Wallant lived more than his brief 36 years, he certainly would have become the equal of other great American Jewish authors, including Saul Bellow, Bernard Malamud, Norman Mailer, and Phillip Roth.

The Pawnbroker is an honest, serious work of art about the human experience, with fascinating complexity and haunting sorrow. Wallant proffers an amazing exhibition of human power, weakness, tenderness, and grace in the characters he writes about.

Deep within the thematic brilliance of The Pawnbroker the reader feels life through the eyes of each troubled character. Wallant proffers an amazing display of vision and clarity in describing the insurmountable suffering of this aspect of the human experience. Although the time period in this novel is 1960s America, the characters’ situations, personalities, and travails ring true today.