Patton's Payback: The Battle of El Guettar and General Patton's Rise to Glory 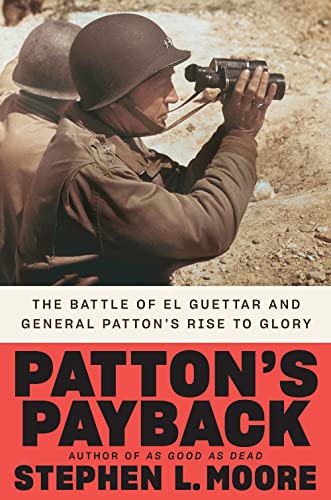 “an excellent tale of the coming of age for America’s victorious World War II Army.”

The American Army’s first encounter with Hitler’s Wehrmacht during World War II was by any measure a complete fiasco. Hitler’s battle-hardened troops gave the green Americans a rough handling at Kasserine Pass in Tunisia in early 1943, casting doubt on the ability of the Allies to face Hitler’s army at the height of its prowess.

There were numerous reasons for the American Army’s poor performance, including a lack of combat experience, poor training, inferior tanks, but most of all combat leadership. The author focuses on the role of George S. Patton, one of America’s most famous and controversial generals, in picking up the pieces of the debacle and forging what would become a battle-hardened force able to ultimately invade and liberate Europe.

Patton had already gained a reputation as the Army’s best armor officer and was planning the upcoming invasion of Sicily when he got the call to head to Tunisia and begin rebuilding the American II Corps. General Dwight Eisenhower, sensing a major change, was needed not only to restore the morale and fighting spirit of the American troops, but reassure their British allies that America forces could stand up to the German Army, sent Patton to relive the previous commander of II Corps, Major General Lloyd Fredendall, whose contradictory command style had contributed signficantly to the American defeat.

Patton went to work with a gusto that both impressed and shocked the troops under his command, immediately imposing a harsh discipline on the typically lax American troops and attempting to instill in them both a soldierly bearing and a desire to close with the enemy.  Sometimes his men hated him as much as the Germans, but Patton’s relentless desire to assume the offensive to keep the Germans off balance and restore the initiative to the Americans soon began to pay dividends.

As the Americans began as series of attacks through the town of El Guettar and the hills beyond, they begin to develop the hardness and skills needed to win at the mechanized combat that typified a World War II battle. More importantly, they learned that they could defeat the Germans with enough skill and persistence, even in the face of heavy casualties. Along the way, Patton makes many difficult decisions, relieving a division commander and pushing troops almost to the breaking point to secure key terrain objectives, regardless of casualties.

Along the way Patton shows his personal disdain for the British, a trait he would carry throughout the war. Complaining about the lack of air cover for his troops, Patton convenes a meeting of high-level British commanders at his headquarters, which is soon attacked by German aircraft, bringing home his point in a remarkable way and persuading the air force commanders to provide additional air support to Patton’s beleaguered ground forces.

Patton’s time in command of II Corps is fairly short, only about five weeks, before he is again called back to continue the invasion planning of Sicily by what will become the American Seventh Army, and General Omar Bradley takes command of the now experienced American infantry and armor divisions to complete the liberation of North Africa and the defeat and ultimate surrender of over 250,000 German and Italian troops.

Moore’s book has a number of personnel narratives to take the reader into the soldier’s level of the action for both the Americans and Germans, and offers a sharp recounting of the turmoil in the Allied high command as the British and Americans, as well as several French units, learned how to fight together to defeat a common foe. It is an excellent tale of the coming of age for America’s victorious World War II Army.