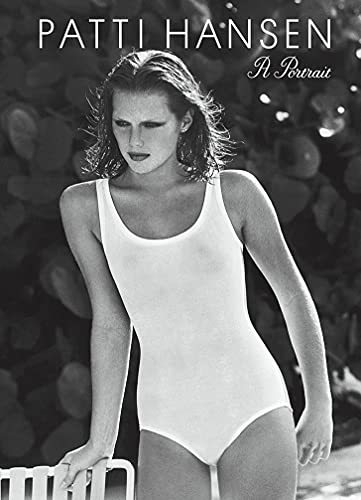 If the prospective reader opts only to look at the images then yes, the visuals in Patti Hansen: A Portrait are quite beautiful and offer a sort of timeline for her ubiquity as a model. On the flip side, if you actually take the time to read the relatively brief text, you will find yourself engaged and magnetized by a young girl who started out as a freckle-faced kid from Staten Island and evolved into an enduring presence within the world of fashion—despite her comparatively short modeling career.

The beauty of the book, of course is the exquisite collection of images, but the educated reader will realize that this is not just a visual diary or timeline of Patti Hansen but rather an intimate telling of a young woman’s rise to fame that has lasted far longer than most who are tagged unforgettable or “supermodels.”

The astute fashionphile will also take note that the girl next door in 1970 became this gorgeous, sophisticated, slick creature who “gave the photographers what they wanted” when it came to “the shot.” It is actually an amazing revelation that she was transformed by her innate talents as a model as well as those of the photographers and supporting creatives who knew exactly what to ask of her and what to get her to exude via the still image. She was indeed lensed by almost every great American photographer of the era as well as several of the European ones. To say she was the “it” girl of a decade is truly an understatement.

Another fascinating aspect of the book is that though her career on the pages of printed media lasted slightly more than decade, the last images in the book provide the reader with the insight that here is a woman who has not only aged gracefully but one might go so far as to say exquisitely. An additionally rare facet of the book is that she actually participated in the telling of her story, which makes Patti Hansen: A Portrait that much more intimate; it is indeed a portrait.

Having been in the same room as she at a social function, this fashionphile can attest that she is as gorgeous today as she was in 1974, albeit a more matured version of her former self. Patti Hansen: A Portrait is a must for devoted fashion readers and those who aspire to reach the status of unforgettable.