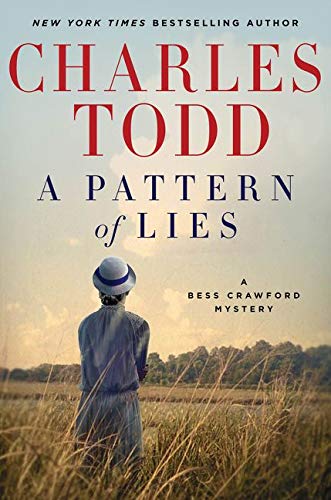 A Pattern of Lies by Charles Todd is another intriguing story featuring heroine Bess Crawford. Set in 1918, the story revolves around an event that occurs two years earlier.

When Bess Crawford, (Sister Crawford) a military nurse on her way home to London from the front lines of France, learns that her train to London is late—with no rescheduled time—she is rescued by a friend and previous patient, Mark Ashton. Rather than leave her to sleep in a railway station, he invites her to join his family in Cranbourne until her train arrives.

She gratefully accepts, and is looking forward to once again seeing Mark’s mother. On the way to his family’s estate, he tells Bess about a problem that is developing around his family. The family business, Ashton Powder Mill, a gunpowder manufacturing company, had met with a devastating explosion two years earlier, and although the government declared it an accident, the local residents who lost family during this event have begun raising questions about what really happened.

During her stay with the family, a variety of nasty events occur, including the arrest of Philip Ashton, Mark’s father, now charged with murder and intentional destruction of the factory. Regardless of the military’s declaration earlier, the community prefers to listen to its own gossip, and the level of anger and desire for revenge begins to rise.

It is at this point that Bess, in an attempt to help rescue Philip, begins her search for the truth about the accident. Her deeper search goes toward learning who is stirring the fire with “a pattern of lies” designed to crush the Ashton family. She gets a cold reception from the town’s residents but learns small bits of the story that she begins to piece together.

Bess has well-placed family and friends and is able to call upon them for help. The story moves across many locations including Cranbourne, Canterbury, London, and the war’s front lines in France. She takes advantage of her connections and soon begins to discover links leading back to the Ashton Powder Mill explosion.

But discovery does not come without danger, and Bess finds her own life threatened by people who do not want the truth—they want revenge.

As with all good authors, Todd has a knack for designing characters that aren’t what they seem, and the reader doesn’t see this until the end of the book (good twists in character development).

It must be said, however, that in this story there is one character who just does not seem to be necessary—Clara—Mark Ashton’s cousin. She is in love with Mark; he is not in love with her. And that does not change as the story progresses. She could just as well have been written out of the story because she contributes very little. Be that as it may, she is just a minor character, and she does not hurt the story.

A Pattern of Lies moves off at a slow start, and often during the first part of the book, the interesting scenes occur when Bess is back at the Front rather than when she is attempting to aid the Ashton family. That is not to say that the scenes in Cranbourne are not interesting and well written, they just don’t carry the same tension in the first half of the book.

But don’t be fooled. Stick with the story. As the book progresses, these Cranbourne scenes do take on a darker tone, with more danger to Bess and the Ashton family. The story takes on speed after the first half of the book, and at that point it is difficult to put down.

For fans of Todd, it is nice to revisit several of the characters upon whom Bess depends and several men who obviously care deeply for her with no chance of that feeling being returned . . . or is there?