The Patron Saint of Second Chances: A Novel 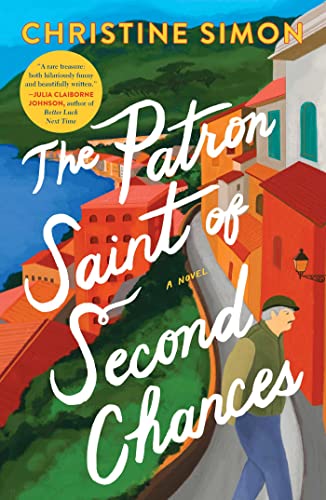 The Patron Saint of Second Chances is a wry and inventive novel about a small-town mayor, Signor Speranza, in the cobblestoned hamlet of Prometto (Italian for "promise"). Situated along the coast of Italy, its population of 212 never seems to waver. Losing young residents for more exciting environs is a given. "Everything was just as it had been when his father was still alive."

Speranza is tormented by an impending municipal debt to replace Prometto's corroded city pipes. His fealty to the church provides solace in addition to addition anxiety as he pages through the Compendium of Catholic Saints and Blessed or Beatified Persons looking for a solution to paying the 70,000 euros coming due. When the saints don't provide an apparent solution, he goes to see a Mafia-type wealthy figure, Alberto, in the next town, whose prosperity increased after rumors that George Clooney would be purchasing a home there.

So why can't Prometto attract a celebrity and with it, the financial resources to replace the city pipes? A local millennial phenomenon, Dante Rinaldi, a social media darling, may just be the ticket out of dislocation for all the town's residents. With the brilliant idea that he will promote a movie located in Prometto and featuring Rinaldi, he promises the local butcher, Signor Maestro, who has almost all the necessary funds, to invest in the movie for substantial returns on investment. But can he keep his promise?  "Unless he came up with some kind of answer to this spectacular problem they were having, in sixty days, there would be no one. Everyone would be gone."

All the townspeople want to participate. His aged uncle, Zio Franco, insists on building an outdoor theater for the movie's premiere: "A stubborn ninety-three-year-old was just an ordinary stubborn person who had been practicing being stubborn for nearly a hundred years."

Speranza eventually concedes to all his friends and family's requests. His wife understands his dilemma: "He is the patron saint of not thinking things through." And the pretext at making the film begins, with Speranza a nervous wreck desperate for a miracle at every setback along the way. Are there really any second chances?

The Patron Saint of Second Chances, a charming somersault of laughs, keeps its promise:  entertaining readers who will feel either nostalgia for the Italy they visited or wish to visit as armchair travelers.