The Patrón Way: From Fantasy to Fortune: The Untold Inside Story of the World's Most Successful Tequila 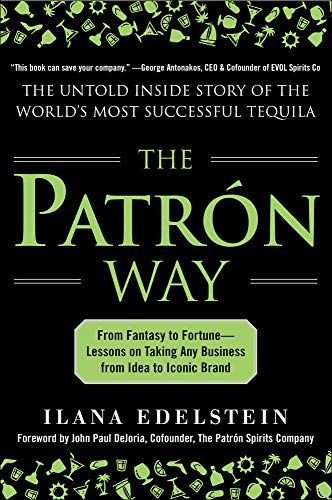 “There’s a lesson in Ilana Edelstein’s priorities that goes beyond business.”

The story of how market leader Patrón tequila was discovered sounds like the making of an ’80s rock band: sex-fueled parties in California, love and heartbreak, and courtroom battles when partnerships turn sour.

In between wild times, there are some good lessons for entrepreneurs launching a product. No doubt, the rise of Patrón is something many would love to emulate. And Ilana Edelstein was there from the beginning and delivers an inside view of the story.

Martin Crowley, her lover at the time, discovered a magical shot of tequila at an old family factory while touring blue agave fields throughout Mexico. Given that Crowley had recently emerged from bankruptcy, he couldn’t buy it himself, but he had the good fortune of knowing John Paul DeJoria. Already wealthy thanks to his John Paul Mitchell hair care products, DeJoria became a partner in Patrón—which turned out to be a wise move, as Forbes mentioned the tequila business prominently in profiling DeJoria’s $4 billion net worth in 2013.

Patrón is the top-selling tequila brand with retail sales of $1.1 billion, according to Impact Databank. It was the first true premium tequila, selling at a significantly higher price with the idea that it should be sipped and savored for its flavor.

For Patrón diehards, Ms. Edelstein did some research on where the tequila came from, although more information about the Mexican family that owned the original farm and struck it rich when Crowley came knocking would have been appreciated. There were tensions between Crowley and some of his Mexican business partners—especially in delivering enough tequila to meet demand when sales took off.

Ms. Edelstein helped Crowley design the memorable Patrón bottle, which was based on perfume bottles. She was also a huge part of its early marketing campaigns, recruiting models, showgirls, and escorts to prance around in Patrón gear at the usually bland spirits purchasing conventions.

In the early days, the line between marketing and partying got blurred, as Crowley and author Edelstein took Patrón to every party and ever bar they went, making new fans along the way.

What captivates more than the business story is the love story in The Patrón Way and its tragic conclusion. Although she never married him, Ms. Edelstein calls Crowley the love of her life; they shared everything. They were a riot together, and many called them Mr. and Mrs. Patrón.

Ms. Edelstein described a birthday party for him at which she had dancing girls wearing nothing but body paint. She even brought other girls into their bed. Crowley had grand ambitions and big ideas, and Ms. Edelstein always supported him while trying to convince potential business partners that he could deliver on his ambitious promises.

The entire time, Ms. Edelstein didn’t take a paycheck. She didn’t take stock in the company. She didn’t have a contract with Patrón. They didn’t marry. So when the relationship ended, Crowley booted her out of the house. She lost a legal challenge and essentially got shut out of the Patrón empire.

Amazingly, Ms. Edelstein doesn’t write bitterly. She expresses grateful for the experience. Her biggest loss wasn’t monetary, but from Crowley’s death in 2003 from heart failure.

“I was gutted,” wrote Ms. Edelstein. “Although we were no longer a couple, I felt a tremendous loss and truly like his widow. Up until that point he had been the most important person in my life.”

Crowley literally worked himself to death in the pursuit of success and living the high life, but pushed those he loved away. Ilana Edelstein cared more about happiness than money. The memories of those great times with Crowley and the pride that she helped launch Patrón are her treasures.

There’s a lesson in Ilana Edelstein’s priorities that goes beyond business.

Brian Bandell is a journalist covering healthcare at the South Florida Business Journal, where he has won over 20 awards for his writing.