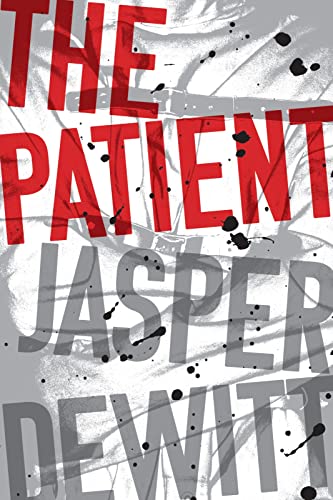 “The Patient is a narrative of slowly building horror that will grip the reader with a continuous set of shivers.”

“‘I write this because, as of now, I am not sure if I am privy to a terrible secret or if I myself am insane,” writes Parker, a psychiatrist looking back on a case that happened when he was starting out in his profession.

To be near his fiancée while she works on her doctorate, the young doctor gains a position at the underfunded Connecticut State Asylum.

On his first day, he’s subjected to the sight of a man in hysterics. The shocking part is that the man isn’t a patient, but an orderly, who has been in the room of a specific patient, after being warned away.

“Every hospital has at least one inmate who’s weird even for the mental ward. Ours was particularly bizarre.”

This patient, Joseph, was admitted at the age of six and has been incarcerated for nearly 25 years, except for one brief home shortly after his arrival. Originally treated for night terrors—in which he insisted a giant bug living in the wall of his bedroom came out at night to try and eat him—he’s been in an isolated section of the hospital for all that time.

Joseph’s parents have never visited him.

When Parker asks for Joe’s file, he finds it empty and has to do some digging to discover the paperwork, as well as several tapes hidden away with restricted access.

The case history is disturbing.

Joseph has had four roommates, all within a period of four days. The first, an adult, nearly beat him to death. The rest were children: the second died of heart failure, the third claimed Joseph assaulted him, and the fourth ripped the bars from the window and threw himself out.

After that, he was isolated.

The tapes reveal nothing irregular, though the doctors and orderlies insist what is recorded isn’t what went on during the session.

The files conclude with the ominous decision by the hospital director:

“Whatever Joe has, we can’t cure it. I don’t even think we can diagnose it.”

With the optimism of youth, Parker believes he’ll be able to cure Joseph and asks to be assigned to his case.

His supervisor refuses but the hospital director, after a long discussion in which she enumerates the fates of all Joseph’s other doctors, gives her permission.

“I was the first, and the smartest person in the room but that didn’t stop me from trying to swallow a bottle of pills four months into treating Joe. His next doctor spent a year, then was shot to death by police when he ran at them with a knife. Joe’s next doctor went catatonic and was institutionalized; the next one committed suicide. Joe’s madness is contagious.”

He finds the patient a mild man, and easy to talk to. When Joe tells him he’s really sane, Parker expects that but the reasoning behind the statement is disturbing: The doctors know this and are keeping Joe there for financial gain, to keep the financially-strapped hospital open with the exorbitant fees they’re charging his parents. When they can no longer morally keep up this charade, that’s when each one reaches his breaking point.

The more time Parker spends with Joe, the more he believes this story and soon he’s working to get Joe released. At last, he decides to meet Joe’s parents, to see where his patient’s so-called madness began.

In that childhood home, Parker learns why Joe’s parents never visited him. He also discovers the terrible truth behind his patient’s psychosis, and why the little boy who came home for that single visit left it with a secret so deadly it drives anyone very long in his presence to madness and death.

Told as posts in a no longer existing online medical chat group, The Patient is a narrative of slowly building horror that will grip the reader with a continuous set of shivers. With the briefest introduction by Parker, we are plunged into the story, and by the eighth page, the reader will experience that initial chill creeping down his spine.

When Parker begins reading Joseph’s case history, the reader will be firmly hooked, captured, and eager to follow this story to its conclusion.

Though most of the narrative is told through the website’s posts and there is very little actual dialogue, it’s never boring, as one revelation after another prepares us for the moment when Parker makes the fatal decision to visit Joe’s parents.

When the last words of this story are read and the book is closed, many will wonder if it could really happen and if being such as Joe might actually exist in our world.

Hopefully, author DeWitt is simply a talented writer and the answer to that question is “No.”