The Path to Sunshine Cove 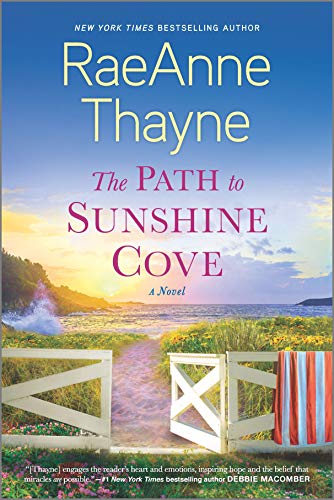 Jessica Clayton's occupation is enviable; she and best friend Yvette run "Transitions," a business where they help others downsize, whether they are moving to a smaller home, a parent passes away and the heirs need to sell, or a client wants to get rid of an accumulation of many years' worth of odds and ends no longer needed. With a vintage Airstream trailer, Jess affectionately calls Vera, she travels around the country to perform her services.

When she is offered an assignment from Eleanor Whitaker to dispose of unnecessary items in Cape Sanctuary, CA, she is eager to accept. She and the 70-year-old widow who is still grieving the loss of her husband six months prior bond over phone calls and emails leaving Jess anxious to meet her in person. There is another factor too why she is excited to be in this lovely seaside community. This is where her estranged sister Rachel and her family live, and Jess hopes to mend the discord between them. They both suffered a horrendous upbringing terminating in the death of their parents when they were teenagers.

Separated in different living situations, Rachel was adopted by a loving couple whereas Jess missed her sibling terribly and felt betrayed. When she came of age, she joined the Army and the rift between her and Rachel never seemed to heal. Now, she will be in the same town, and she is hoping they can reclaim the closeness they once shared.

Awed by the dramatic Whitaker House situated at the ocean edge, Jess cannot wait to start her new job. But as she backs her trailer into an empty spot on the lawn, she is accosted by a handsome young man who happens to be Eleanor's son, Nate. By his hostile greeting, she soon learns Eleanor did not inform him of hiring her, as he displays his protectiveness to his mother.

Nate is baffled because his mom did not mention she hired someone to clean out her huge home even though Nate and his precocious 13-year-old daughter Sophie live in a smaller home on the property. He wonders if she is considering selling the place, especially seeing she is grief-stricken after losing Nate's dad.

When Eleanor returns from her errands, she tells him of her desire to dispose of all the extraneous stuff in the huge house, though she has no desire to sell.

Once settled, Jess visits Rachel and their meeting is strained. She senses Rachel is under intense pressure, but she refuses to tell Jess anything. She and her husband Cody are raising two young daughters and a son, Silas who is autistic, so Jess believes this is what is causing her sister’s stress.

"They had always been different, Rachel quieter, happy to have a good book, and somewhat comfortable to read it while Jess always wanted to go on a hike, go swimming, ride her bike around the neighborhood. Something active and away from home.

"Despite that, they had been best friends, only two years apart. Rachel had known the deepest thoughts inside her. Shared trauma should have brought them even closer together. Instead, it had ended up driving a wedge they couldn't seem to bridge."

As Jess spends more time with the Whitakers she is drawn into their happy circle. Not only does she consider Eleanor the mother she wishes she could have had, but Sophie proves to be charming and she loves spending time with her. Nate—he’s another story. Jess deemed she would never get into a relationship. After what she went through with her parents, she cannot trust relationships, yet there is something mesmerizing about Nate—and it appears his feelings match hers.

Nate is a single parent to Sophie; his wife died many years ago while serving her country, and Nate, a busy contractor never realized the need or found the right woman who would make him want to marry again. With the few dates he went on, nothing went further than that—that is until now when he finds himself falling head over heels for Jess. However, what can he do? As soon as she finishes her work at his mom's house, she will be leaving. She is adamant about stating this fact.

Meanwhile, Jess's 30th birthday is approaching, and Rachel is planning the perfect party. She is very intense wanting everything to be just so and will not accept help from Cody or anyone, which is causing tension between them. When Jess arrives for her celebration, along with Eleanor, Nate, and Sophie, chaos reigns after Silas gets into the garden hose and makes a mess. Though Cody is excited his son is showing some signs of normalcy, Rachel cannot contain her anger, and she lashes out at Jess. Can the sisters ever reclaim the closeness they once shared?

The Path to Sunshine Cove addresses a heartbreaking and sobering topic and the effects of the pain it causes.