The Passions of Dr. Darcy 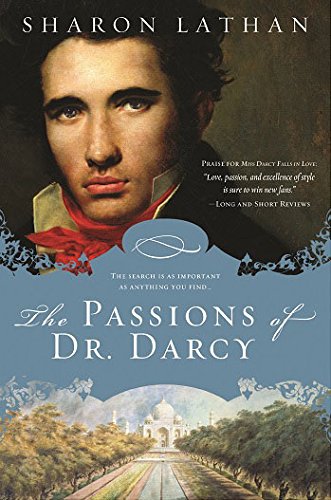 Many readers are aware of the romance of Elizabeth Bennett and Fitzwilliam Darcy in Jane Austen’s Pride and Prejudice. Now Sharon Lathan tells the story of another Darcy in this latest entry in The Darcy Saga.

After seeing his twin brother Alex die at the hands of an incompetent physician, 12-year-old George Darcy, second son in the Darcy family, vows to become a doctor. He succeeds and at 22 is on his way to India in the employ of the East India Trading Company.

The spectacle of India’s struggle with its colonizers and the historical ramifications present a brilliant backdrop to the young physician’s sojourn in a country he will soon call home.

Handsome, personable with irreverent wit and an infectious joi de vivre, George is a more than competent diagnostician. Because of this, he soon runs afoul of the Chief Surgeon whom he proves time and time again to be wrong in his diagnoses.

The passion of the title pertains to love, of course . . . of that George Darcy has for women, but it also relates to his concern for his patients and his integrity in treating them. In this context, Dr. Darcy has three passions women . . . of India . . . and his love of medicine . . . not necessarily in that order.

It isn’t long before George falls in love twice and both times is devastated. His first love is Sarah, the pathologically shy daughter of a visiting noble. George brings her out of her timidity through his affection but loses her when he refuses to return with her father to England and become a “mere country surgeon.”

Not that he loves India more than he does Sarah but he can’t see how his giving up treating the people of a country needing him should equate with his love for her.

Through the instigation of the chief surgeon, Sarah’s hand is given to a rival who gladly travels back home. George’s second foray ends more sinisterly though he’s unaware.

His love for Ruby, another lord’s daughter, is wantonly returned but for an ulterior motive. Ruby’s secretly married to Lord St. Laurent, a sterile noble needing an heir. He choses George as the surrogate sire and though Ruby actually cares for George, she loves St. Laurent’s title more. Once she’s accomplished her mission, she deserts him with no word of explanation.

Though there’s sex in the story, it’s couched in the vernacular of an Austen novel so it’s more emotionally than graphically descriptive. Nevertheless the narrative is evocative of great passion.

George is accepted by the native populace, learning their languages, adopting their clothing, and fitting in more easily than the rest of his countrymen. He’s taken under the wing of Dr. Ullas, a practitioner of Ayurvedic medicine and meets Jharna, the doctor wife, and becomes almost a member of his family. For the next dozen years, George and Kshitij Ullas treat the people.

The spectacle of English colonization and war in India is presented, not in the minute detail one might expect from a historical narrative but only as it relates to George and his practice. He’s called to minister to the wounded when British soldiers are hurt during battle, otherwise he stays out of the fight and continues his rounds in the cities, tending the inhabitants.

When Kshitij dies, George takes his place as foster father to his friend’s children and eventually realizes his love for Jharna. Years pass, however, before he declares himself, only to discover her feelings are the same. Though the two never marry, they consider themselves wed and everyone they meet believes Jharna to be George’s wife.

A portion of the story is told through George’s journals, written to various deceased family members, his twin Alex, his father, and later, Jharna. His observations on the development of his nephew Fitzwilliam as an infant, a child, an adolescent, and later the adult man winning Elizabeth Bennett’s heart, bring new facets to that character as originally presented in Jane Austen’s novel.

At last, George’s idyll in India comes to an end. Now a widower, he returns to England, to be welcomed back into his family, but not to settle into obscurity. George is too much of a forceful figure to simply idle away his elder years.

George Darcy left England an idealistic twenty-two year old, setting out to find adventure. When he returns thirty years later, he discovers more passion and the greatest adventure of all awaiting him.

Anyone who has read Pride and Prejudice will enjoy this story though that isn’t a prerequisite. One doesn’t even have to read the other entries in this series since this could also be a stand-alone. It’s a splendid tale of one man’s determination . . . to be the best in his chosen profession . . . and to find love.