The Passenger: A Novel 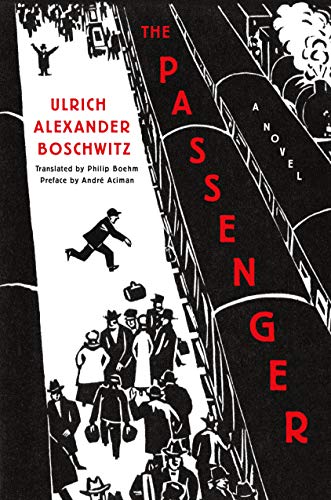 “What he did see—and described in sharp, yet understated, detail—was the growing panic and slow loss of innocence among German Jews.”

The most amazing aspect of this compelling novel is that it was written in real time: Ulrich Alexander Boschwitz, the son of a wealthy and assimilated German Jewish factory owner, then living in Belgium, pounded it out just weeks after the Kristallnacht attacks on German Jews in November 1938.

He had no idea, while he wrote, of the looming horrors of Auschwitz or the Nazi ghettos. He could not have known that Hitler would be dead in six and a half years, after a second worldwide war.

What he did see—and described in sharp, yet understated, detail—was the growing panic and slow loss of innocence among German Jews.

Early in the book, Otto Silbermann, a successful Jewish businessman in Berlin who looks Aryan, passes a man on the street near his apartment building who asks, “Do a lot of Jews live here?” Immediately, Silbermann thinks: “Don’t turn around. . . . Don’t walk too fast or too slow. Because if you stick out precisely when you’re trying so hard not to, if you look suspicious because you’re trying to look as unsuspicious as you can . . . My God, what do these people want from me?”

Silbermann is the passenger of the title. After a group of Nazi thugs break into his apartment searching for Jews, he spends the rest of the novel on the run, traveling by train back and forth across Germany from Berlin to Hamburg to Aachen to Dortmund to Dresden and points in between, for a total of over 1,600 miles in just three days. Dryly, he thinks, “At least I’ll get to know Germany.”

(Author Boschwitz could also not have predicted the awful symbolism that riding on a train in Germany would later evoke for Europe’s Jews.)

Growing increasingly desperate, Silbermann tries to flee across the Belgian border. He takes rooms in hotels and rooming houses but never stays, terrified that he’ll be arrested for being Jewish.

Meanwhile, his formerly comfortable life is crumbling. He is forced to sell his salvage business at a fire-sale price to his Aryan manager and longtime friend, who sneers that Silbermann is “a nervous little Jew quivering over his money.” His Jewish lawyer is arrested. His Protestant brother-in-law refuses to let Silbermann take refuge in his home. His doorman’s son, dressed in a Nazi uniform, turns his back.

In a surreal, rare moment of lightness, he flirts with a charming and clueless Aryan divorcee whom he meets, of course, on the train.

“I’m being hunted,” Silbermann tries to explain to the divorcee. “I’m not used to that. Somewhere inside I’m still living my old life, my normal life. . . . I served on the [World War I] front! I was a citizen like everyone else.” As he tells her, “I also never thought they’d push things to the extreme.”

Although Boschwitz wrote The Passenger in German, he obviously couldn’t publish it in Hitler’s Reich, so it was first printed in English, in 1939. The author himself became an involuntary “passenger”: Arrested in England as an enemy alien after World War II broke out, he was interned initially on the Isle of Man, then in Australia. During that time, he revised the original German manuscript. After he was finally permitted to return to England, he died in 1942 when his ship was torpedoed, and his updated version was lost.

However, the original German manuscript was rediscovered a few years ago. It has been revised by the publisher and newly translated into English by Philip Boehm.

Three words sum up Silbermann’s absurd and frantic situation. When the police refuse to investigate a robbery complaint that he files, he shouts, like a good German citizen: “There are laws!”