The Pasha of Cuisine: A Novel 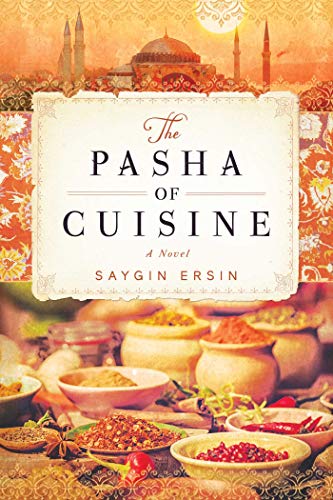 “This enchanting novel is not your typical fast food beach read. It is more of a seven-course feast, meant to be savored, word by word.”

Like pepper rice, infused with fresh butter and the sharp scent of peppercorns, The Pasha of Cuisine, is a rich and satisfying read. Author Saygin Ersin takes us into the exotic world of palaces within palaces, kitchens staffed by hundreds of cooks and servants, and where a single dish can change your life forever.

Peel away the exotic location and the exquisite food writing and you have a simple love story. You know, that timeless one where boy meets girl, boy loses girl and then . . . well you get the idea.

Appropriately the book begins with a feast, a lavish banquet in the home of an eminent merchant, for the Chief Sword Bearer of the sultan. The meal is sumptuous and everything is going as planned until the Chief Sword Bearer is served a dish of stewed leeks along with the roasted lamb. Everyone, including the cook, knows of the honored guest’s aversion to leek. But instead of being punished, the cook is asked to join the Chief Sword Bearer’s staff as his personal chef.

Even from a tender age, the boy (who is only known as the cook) has an advanced palate. The Royal Kitchen’s Head Cook, Master Isfendiyar, takes it upon himself to create special dishes for the temperamental boy using only the freshest ingredients.

After a bloody massacre in the Imperial Palace, the young survivor takes refuge in the palace kitchens. Master Isfendiyar suspects the boy is no other than the Pasha of Cuisine and sends him off to be trained by Master Adem, head cook in the House of Pleasure.

The young boy impresses Master Adem with his sense of taste and when the chef understands that the boy is the next Pasha of Cuisine, he takes his teaching very seriously. As everyone knows, the Pasha of Cuisine is said to be “in possession of the perfect palate. It is said that the power of the Pasha of Cuisine would increase the skill of all cooks everywhere and render exquisite the flavor of every dish they made. In short, a new golden age of taste.”

The cook’s life changes forever, though he doesn’t know it at the time, when he is 11 years old and meets Kamer. The willful young girl is thrown into the adjoining storeroom for her disobedience by the House of Pleasure owner Sirrah. An unlikely friendship develops between the cook and the lovely Kamer and slowly blooms into young love in the coming years.

Even though the cook isn’t in charge of preparing Kamer’s food, he is allowed to complete the final presentation. The cook starts to add a small gift to Kamer’s food. A handful of walnuts boiled in sugared water, a few meatballs he cooked up when no one is looking or even a simple crushed bay leaf. He declares his love through food and for the rest of his life he associates the scent of green apples and sweet cloves to his undying love for beautiful Kamer.

But Kamer’s life is in the House of Pleasure, and the cook is busy honing his skills in the kitchens, and there is no way the young couple can be together. They are torn apart by circumstances beyond their control. In order to distract the young cook, Masters Isfendiyar and Adem send him on a journey to learn more about his craft, his destiny as Pasha of Cuisine.

First he meets the el-Haki brothers. The twins are identical except one is an astrologer and the other is a doctor. From Sa’d el-Haki, the cook learns the secrets of the sky and how the sky is like a flowing river, ever changing. Brother Sadr teaches the cook the importance of diet in healing the body.

After spending two years with the el-Haki brothers, the cook has learned the secrets of the earth and sky and is fluent in the language of the stars and plants. He is also ready to meet his next teacher: The Lady of Essences from whom he learns about the secret of spices.

Life with the Lady of Essences is calm, serene and educational. “Cumin is one of the most capable spices. Cumin calls out you, lusty and enticing.”

The lady teaches him that “Spices are not related to intelligence, but to emotions.”

But soon it is time to move on and the Lady of Essences tells him he has to go to Alexandria to meet the Master Librarian. It is this city that his past and present destinies come together and he learns the greatest secret of what it means to be the Pasha of Cuisine.

The more the cook learns about cooking, the more he learns about himself. This journey of self-discovery will finally lead him to his love Kamer but will everything end well for the young lovers?

The story weaves back and forth, but the transitions from present to past are seamless, and the reader is taken on a sweeping journey in the Ottoman Empire. The names of the different characters can be challenging, but don’t let it deter you. Ersin’s story and his description of food, cooking and life in the Ottoman Empire are gripping.

His words bring flavors to light and to your tongue. “He took a large clove of roasted garlic and spread it onto a slice of bread. The garlic seemed hard on the outside, but inside it was soft as paste. The garlic seemed to be in love with heat; as soon as it was introduced to those hot, fireless, smokeless cinders, it melted on the inside, abandoning its sharpness and assuming a soft, mild, almost sweet taste.”

This enchanting novel is not your typical fast food beach read. It is more of a seven-course feast, meant to be savored, word by word.

Special kudos goes to Mark David Wyers for his outstanding translation from the original Turkish.