The Party Is Over: How Republicans Went Crazy, Democrats Became Useless, and the Middle Class Got Shafted 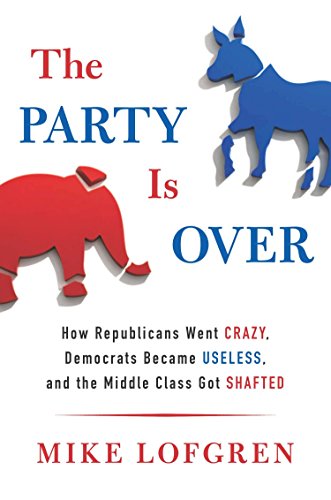 The 2012 presidential election is around the corner, and this is a good time for bringing out angry partisan books on American politics.

Mike Lofgren’s book The Party Is Over does not fit neatly into this category since it lashes out at both Republicans and Democrats, but it will probably be felt as speaking from and to the hearts of Independents and disillusioned voters.

The book is about “America’s broken political system: how it got that way, who benefits, and who loses.” A pretty lofty goal—yet, surprise, surprise, the answers are simple: America’s political system is broken because it has come to be dominated by special interests; the main beneficiary is corporate finance; whereas citizens are to be found on the losers’ side—and still they too are to blame because they are stupid and, therefore, can be easily manipulated. This critique applies to the GOP especially but Democrats do not fare much better, their language is simply less extreme, not so their practices.

There is no doubt the American political system, and especially the political discourse, is undergoing a crisis. In actual fact, this is true of politics more generally. That has a lot to do with the pervasiveness of modern communication which seduces to a state of constant campaigning.

Mike Lofgren is correct to point out that since the 1990s the GOP has been fanatical in its use of new and old instruments of political propaganda to feed the heat of partisanship. His description of how Republicans have been abusing language to set the political agenda, and, by doing so, hide their lopsided interest representations—whether in military matters, questions of taxation or budget discipline—is instructive, even if well-known from newspaper reports and political satire.

Still the book does not succeed to move beyond the descriptive, thus falling short on its promise to deliver an analysis of how and why we have arrived here. The attribution of the blame to special interests is very fashionable these days, and Mike Lofgren does not miss the opportunity to jump on the bandwagon; but that is sort of a quick fix, overlooking the possibility that the presumed growing influence of special interests is itself a symptom rather than the root cause of our problem.

Furthermore, the claim that American voters—or at least a big segment of them—exist in a state of false consciousness, and that this is the reason why they fall prey to ideological debates about less important issues such as abortion or gay marriage, is precisely the type of intellectual arrogance that invites further polarization.

It is true the state of the economy, foreign policy or health care, are more relevant political issues in the here and now as compared to cultural or religious questions, but that does not mean the latter are to be excluded from the public sphere.

On the contrary, the reason why such issues will often determine voter alignment is because they touch upon principal values or beliefs. This is also true of the key issue underpinning the present electoral campaign and also the political fear mongering of the last couple of years: the question of the role of government and the scope of government intervention.

In reality, this is what has been galvanizing the supporters of the Tea Party but also, at the other end of the spectrum, those backing the Occupy Wall Street movement. It also explains many of the debates—and exegeses—within the GOP.

Unfortunately Mike Lofgren has little to say about this important issue which American voters will have to confront over the next years—and not just at the forthcoming elections, regardless of their outcome.

The Party Is Over reiterates the familiar arguments about the pitfalls and dangers of partisanship and does a good job in terms of portraying the frequent ludicrousness of modern political argumentation.

But this is basically an angry book—and political anger is not as constructive as its author likes to think.