The Party and the People: Chinese Politics in the 21st Century 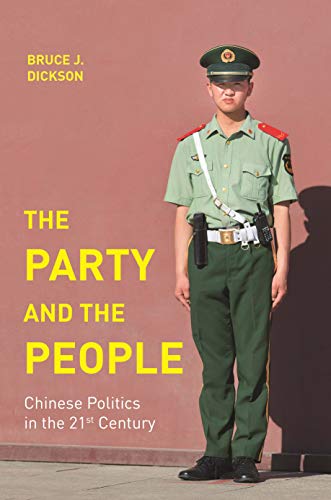 Bruce J. Dickson, a professor of political science at George Washington University, addresses eight fundamental questions in The Party and the People. What keeps the Chinese Communist Party (CCP) in power? How are Chinese leaders chosen? How are policies made? Does China have a civil society? Do political protests threaten political stability? Why does the Party fear religion? How nationalistic is China? Will Chine become democratic?

The author seeks to present the consensus views of professional China-watchers for general readers concerned about China and the world. Underlying all his analysis is the conclusion that standard modernization theory is wrong. The standard expectation was that, as a society becomes more prosperous, its rising middle classes will force it to become more democratic.

Since Mao Zedong’s death in 1976, Chinese leaders have bet on the opposite outcome. They have wagered that if China becomes wealthier, most of its people will reward the Party with obedient acceptance of Communist rule. So far, Dickson says, the Party’s leaders have won their gamble. Most people are more interested in material well-being than freedom. On occasion the CCP leadership tries to appease some popular demands, such as the need for cleaner air. But it claims a monopoly of wisdom on serious political issues.

How Chinese top leaders are chosen is not democratic but, in many respects, meritocratic. To reach the highest positions, an aspiring leader must first of all prove himself (few women are given this chance) to serve in a variety of party and government posts at the local and  central levels.

Thus, Jiang Zemin (top leader from 1989–2010) circled through a series of jobs in Shanghai and Beijing dealing with foreign trade and the electronics industry. In Shanghai  he showed his political skills in 1986 by negotiating a peaceful end to student protests. He also made it a point to please top  CCP officials—personally delivering their suitcases to their hotel rooms. He became general-secretary of the CCP in part because he was not associated with the Tiananmen massacre in 1989. Meeting with foreign leaders, he could speak Russian, sing Italian opera, and quote the Gettysburg address in English.

Xi Jinping was selected top Party leader by a straw poll of senior leaders. Unlike Jiang Zemin and Hu Jintao (2002–2012),  he had no reputation for technical skills or academic repute (his Ph.D. thesis in law [Marxism] may have been ghosted). Unlike his predecessor, Xi  was not hand-picked by Deng Xiaoping. However, Xi was a “princeling” whose father had been purged by Mao but later rehabilitated by Deng.

Most of Xi’s career was spent in administrative posts, where he cultivated relationships with military elites. He showed political skills in administering Fujian and other places far from Beijing  Withal, he made no enemies but many useful connections. To consolidate his positions as China’s top leader, Xi has removed term limits on the presidency from the constitution.

Dickson does not make this point, but the ascent of CCP leaders since the late 1970s has been more like Joe Biden’s than Donald Trump’s—more like Barack Obama’s or the Bushes’ than Ronald Reagan’s. Financial support by billionaires or by $25 contributions from the hoi polloi play no part in Chinese electoral politics.

The media all parrot the Party line, but there is no opposition voice like Fox News in the Obama era. There is no opposition party challenging the legitimacy of current president Biden. The Chinese system has been more stable and less chaotic than the American. Still, nearly half the foreign businesses in Hong Kong have moved or are considering moving away from the kind of “stability” afforded by CCP rule.

One apparent victory for the CCP is that Chinese are now rated as the most nationalistic people in the world. More than half of the population believes China is better than most other countries. Even if they could pick any country, over half would choose to remain citizens of China. While young Chinese are seen demonstrating against evil Japanese and Americans, detailed surveys show that they are somewhat less nationalistic than their elders. Nationalist feelings peaked at the time of the Beijing Olympics in 2008 and have decreased since then,

Not all nationalist demonstrations are orchestrated by the CCP. Starting in the 19th and 20th centuries, many Chinese have protested their government’s failures to resist foreign interference and aggression. This happened also when US bombs dropped on the Chinese embassy in Belgrade and when a US plane was forced to land in Hainan. But the CCP has made clear it does not want advice from anyone outside the Party leadership. The CCP uses nationalism but tries to keep it under Party control.

Roughly 8 percent of China’s population is not Han Chinese. Like Native Americans, Chinese minorities differ in their readiness to assimilate with the dominant ethos. CCP efforts to convince Tibetans and Uyghurs to see themselves as Chinese have encountered  stiff resistance. Mongolians and Koreans have been more compliant. Cantonese speakers in the south, though Han, have resented the imposition of Mandarin language and Beijing norms on them.

What are the prospects of regime change in China? Dickson’s analysis of this question is one of his strongest chapters. Authoritarian regimes based on military rule seldom last more than a decade. Those centered on the dictatorship of a strong or charismatic leader last a bit longer. One-party regimes average just over 20 years, but the Soviet system endured for 74 years. China is now at age 72. But it has many advantages over the Soviets. The CCP has adapted to change rather effectively and has shown that it can improve living conditions for most Chinese. It is incorporating modern technology to create an Orwellian system of totalitarian controls. Thanks to economic growth, it has enormous financial resources for infrastructure at home and—with the Belt and Road Initiative—in needy countries abroad.

The conditions for a “pacted transition” as occurred in South Africa are missing in China, where there is no opposition leader like Nelson Mandela or an incumbent like F. W. de Klerk. Thanks to an elite-led transformation, Taiwan experienced regime change in the late 1980s and has become a vibrant democracy.

Even if there is some form of regime change, however, it need not mean democratization. The end of an authoritarian regime most often gives rise to a new authoritarian regime. The demise of Communism in the USSR produced a few years of democracy in Russia and then decades of one-man rule. Of 29 formerly Communist countries in the Soviet Union and Eastern Europe, only ten (such as Estonia) became democracies. Years after the “Arab spring,” only one Arab country, Tunisia, is democratic. Meanwhile, democracy has weakened in East Central Europe and the United States.

Civil society organizations could provide a grassroots basis for democracy, but the CCP has welcomed only those that support its social welfare agenda with their resources and expertise.  At the same time the CCP leadership seeks to root out and eliminate nongovernmental organizations that threaten the Party’s legitimacy by promoting labor rights, human rights, or religious freedom.

The Party and the People provides an authoritative survey of the major issues confronting China as seen by many China-watchers. But there is little consensus among specialists on the eight major questions Dickson discusses. Some sinologists see deep fragilities in the entire Chinese Communist system. Beijing’s treatment of Hong Kong and ethnic minorities such as Uyghurs probably reflect deep insecurities. Many of the regime’s infrastructure investments have been unproductive and have weakened the country’s finances.

Despite some success in harnessing solar power, China is the world’s leading polluter—weakening public health as well as long-term prosperity. Clean water is becoming scarcer.  Demographic change is creating an ever larger share of retired elders dependent on the support of a shrinking share of working-age people. China’s efforts to develop soft power abroad are faltering.

Western business elites are divided on whether to ignore cultural genocide in Xinjiang and continue business as usual with Chinese firms. China-watchers concerned for US foreign policy are far from united on how Washington should react to China’s militarization of the South China Sea and threats to Taiwan. Even if the CCP  attempts to hold back nationalist impulses, its internal weaknesses could provoke actions that endanger peace in Asia and worldwide.  Complacency and appeasement, as recommended by John Mueller’s The Stupidity of War, can hardly be the wisest approach.