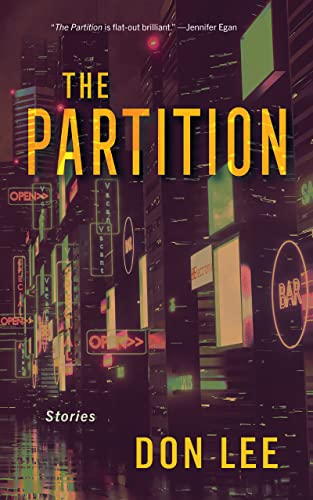 The Partition is a wide-ranging collection of nine short stories focusing on aging, loneliness, sexual identity, the brutal competition in the movie industry (“Late in the Day” and “Les hotels d’Alain”), the politicking and cutthroat nature of diplomatic assignments; and casual dating and the devastating aftermath of a breakup.

Additional themes include the rarefied and ravaging standards for female beauty that compel some to plastic surgery (“Confidants”, “The Partition”). But perhaps the stand-out perspective found throughout The Partition is the fact that all main characters are Asian American (primarily East Asian American) and not white. The reader will often have to be reminded that the assumption all characters are assumed to be white is not the case.

The short stories deal with abandonment and jealousy in family relationships, partnerships motivated by money and ambition, teenage sexual insecurities, and career choices that are often immoral and callous. In other words, dissecting the challenges all adults face at different stages in their lives. What makes these stories metaphorically a "partition" is the fact that the interjection of ethnic identity is always there, imposed by whites and almost never set aside. The partition is divisive.

All stories deal with subtle, submerged, and scathing stereotypes imputed upon the characters because of white bigotry: the sexualization and fetishization of women for their "exotic" beauty, the psychological castration and emasculation of men, the academic but "nerdy" student. These pestilent vectors make all the characters deeply wounded at times in a specifically white American context, with overtones of racism. The stereotypes whisper of limitations and impossible obstacles that are internalized and destructive.

Two stories are worthy of being novellas in themselves. “The Partition,” is the titular portrayal of an American academic, Ingrid Kissler, who is Korean American: "She was thoroughly happy, being alone. . . . They couldn't abide that anyone would actually choose to be alone."

And Ingrid is convinced unequivocally that her life will be stable and absolutely independent of any personal relationships. Her position as an untenured professor and translator of Korean literature is more than enough for a satisfying life . . . until it is not. The free-wheeling juxtaposition of the Korean writer, Yoo Sun-mi, and the hyper-restrained and introverted Kissler could not be a more astonishing contrast between the resulting behavior of being raised in the US as a person of color versus being raised in Korea with the same ethnicity. The journey of the two women alternates between hilarious and redemptive.

The second standout is "Les Hotels d'Alain" which guides the reader on a sweeping overview of Alain Kweon, first with his CIA expat family as a teenager residing with his parents in Japan. Finding joy and pain with his first white girlfriend is authentically rendered in dealing with not only sexual but also racial politics. Then there are assignments in other “hotels” in the Middle East with his unhappily married parents.

Back in the US, as a young adult, Alain is committed to becoming an actor but relegated to stereotyped roles as a Chinese bit-player in low-budget kung-fu action movies. In middle age, Alain finally becomes financially successful as an entrepreneur who has created a faux Taiwanese drink—boba tea—culturally appropriated for San Franciscan white affluence. By the time Alain is on the cusp of 60 years of age, he has to assess the retrospective of his life: where he thought he would be and where he is now, "When I was fourteen, fifteen," I said, "I could've never predicted this is where I'd find myself. I never would've thought my life would end up like this. Did you?"

Couldn't we all ask ourselves the questions Don Lee raises? The Partition is a collection of tales of the universal dilemmas in being human. We are prisoners of our own subjective experience and that leads to having blind spots we didn't even know we had.  The Partition may help us get out of our defensive crouch and enjoy the ride.