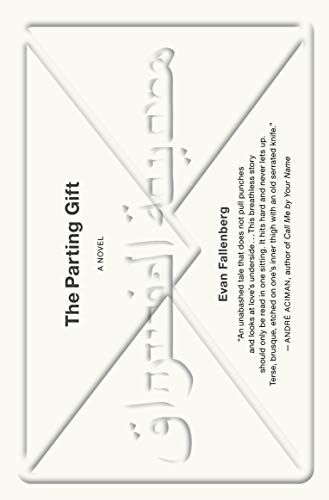 Evan Fallenberg’s novel The Parting Gift takes the reader through the emotional turmoil of love, lust, trust, and mistrust that often accompanies affairs of the heart.

The story starts with his protagonist, who travels through the story unnamed (and will be referred to simply as “he”), writing a letter to his friend, Adam. “He” has been living with Adam and Adam’s girlfriend, Beth, since landing at their door several months earlier.

As this letter unfolds, “he” prepares for his departure by revealing his recent life experience—an experience most telling.

Raised in California, “he” wanders through life ending up with several friends in Israel where a visit to a popular herbal shop results in abandoning his friends, and becoming sexually involved with Uzi, the owner of the shop. “He” is 29, Uzi is in his 40s, twice divorced, with four children and two ex-wives, all of whom remain close physically, but not emotionally.

As “he” describes how the budding affair developed and flourished, it is apparent that Uzi is incapable of expressing warmth in his relationships. But the sex is amazing and graphic, so the personal warmth is, at first, unnecessary.

As Fallenberg progresses through the story, he frequently takes the reader back to the understanding that this is, indeed, a letter, as he mentions Adam and Beth, and “he” is not kind to Adam about Beth, yet stays just this side of being downright cruel. He gives just enough needling to plant the seeds of disfavor about the woman. And “he” makes sure Adam realizes where the experience with Uzi went.

Uzi’s first wife, Nina, lives next door, with their four children. Uzi’s relationship with his family is not warm, it is not cold, it just is. Nina quickly discovers that “he” and Uzi are enmeshed in a deep sexual experience; she is stunned, yet not fully surprised. Nina and “he” form an uneasy rapport. The oldest daughter, Rinat, desires a deeper relationship with her father, but that is not to be, and instead “he” steps in to that uncomfortable position.

As time moves forward, “he” takes a more active role in Uzi’s business, increasing the size, output, and income throughout the world. It becomes a very productive business and puts more money in the coffers. All the time, “he” wants for nothing, and in fact has nothing to call his own . . . except phenomenal sex with amazing frequency. He is happy until . . .

As with many relationships, the lust begins to fade (as “he” interprets it) when others begin to arrive on the scene. Ibrahim, in particular, the son of a man who supplies herbs for Uzi’s business, is taken under Uzi’s wing, and “he” begins to see the world through the green eye of envy.

There are fewer afternoon delights shared between “he” and Uzi; more of Uzi’s time is spent with Ibrahim and the business; and “he” finds a once-a-week pleasure with Ziad, a worker at the business.

So, where is Fallenberg taking this story? Down the path of destruction as “he” succumbs to his jealousy, yet without justification or proof. The result is a plan that “he” sets in motion to destroy Uzi, and Ibrahim, and Nina, and the entire family.

And what of the plan? “He” explains it in detail to Adam—how he constructed it, how he carried it out, and all the reader can do is shake his or her head, and say, “Wow!”

Fallenberg has designed a main character who is not terribly likable, and yet, an Everyman, because “he” experiences those same tough sides of life that everyone experiences, and he deals with them in much the same way as Everyman does.

The story is so well put together that the reader almost takes the lead from one step to the next. We think we know what’s going to happen next, and then we discover we are wrong . . . or are we?

And at the end, Fallenberg leaves the reader wondering the true purpose of this lengthy letter—until the very last sentence. This is a small book, quickly read, and definitely belongs on the library shelf!