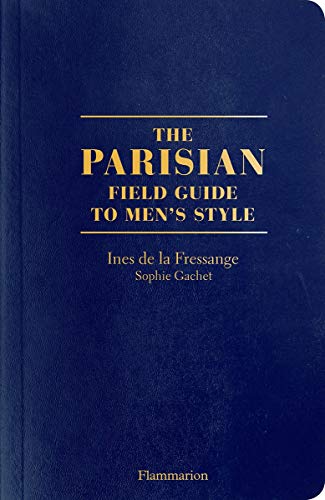 This is the fifth of a series, the previous four of which have been reviewed here at NYJB, by these two authors who usually find a unique way of presenting the subject at hand even though other writers have previously engaged the same topics.

Any man, between the ages of 18 and death, that has more than a just a passing interest in their own personal style/appearance and shopping has very little use for this book. A majority of the brands are quite well known as are the supposedly sartorial insights that are proffered as uniquely Parisian which they are decidedly not . . . at best one might say European.

The redemption of the book comes in chapters that deal with personal care/grooming such as haircuts, spas, etc., as well as out of the way uniquely Parisian shops that only operate locally. Also to the book’s credit is that the authors offer a menu of eateries that may not be found in any local tourist guide. Sadly they found the need to add a chapter on gift giving which is sort of silly.

While the cuteness factor is abundant, the repetitive/overlapping text seemed not only simplistic but at times rather vapid and quite commonsensical. The opening chapter which is about personal style attributed to their “friends” is far too long as the idiosyncrasies are so basic and so personal as to cause the reader to occasionally think, “Well duh!”

The Parisian Field Guide to Men's Style would have been better served if their selection of friends was thinned out and better curated for unique characteristics and utilizing only those “friends” who are truly not part of the flock in their sartorial affectations.

For the most part, the book is lighthearted until the authors take on this dictatorial/authoritative attitude of what is never acceptable and is out of style and not very Parisian! They might have been better served to sit at an outdoor cafe and watch the passing parade before espousing the absolutes of what does and does not make the grade when trying to affect the Parisian style.