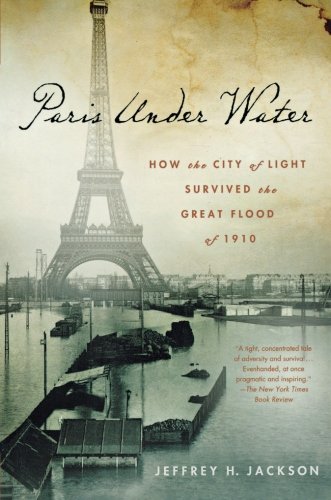 In Paris Under Water, history professor and director of the Environmental Studies program at Memphis’ Rhodes College, Jeffrey Jackson, reconstructs a little-known story of civic disaster from the annals of Parisian history. In January of 1910, the Seine, overloaded by torrential rainfall, rose in the course of a week to record heights, and its waters reached speeds no worst-case scenario had anticipated.

Basements began flooding on January 22, and the city’s sewers neared capacity—a bona fide municipal emergency—but waters continued rising, first devastating the city’s unwalled suburbs and sending refugees streaming into the capital. A citizen of one city, Alfortville, went to sleep with some water in his courtyard, and woke up at 4:30 A.M. to find his dog crying in his bed as water rose around them.

On January 25, a second act literally began with a bang: a vinegar factory in the suburb of Ivry exploded when the flood mixed chemicals stored there, and firefighters conducted a daring operation through knee-high water to stem the flames’ progress before a second explosion could be set off.

By the next day, the waters had reached such a height in Paris itself that boats were essential for moving through the city, and entire neighborhoods were evacuated. The poet Guillaume Apollinaire, whose accounts for the Parisian newspaper L’Intransigeant Jackson returns to throughout his narrative, had to abandon not only his home but also his book collection, and struck out to observe and chronicle the scenes of displacement.

Local gangs, nicknamed the Apaches by local newspapers, predictably saw the flood as a prime opportunity for looting, and many citizens engaged in vigilante justice.

On the whole, though, Jackson’s recounting of the flood is an optimistic one that highlights the earnest responsiveness of a police prefect, Louis Lépine, doing the best he can with limited resources, and a societal mind-set the French refer to as Système D. D stands for débrouillard, which comes from a French verb meaning “to untangle.” Sytème D represents natural resourcefulness and a spirit of independent thinking that works creatively within a system, without being hidebound by it. The visual embodiment of Système D are the passerelles, makeshift footbridges and wooden walkways constructed between buildings and above the city streets from whatever residents had on hand—planks, barrels, ladders, and the like. The longest extended more than 2,600 feet and allowed residents in areas that were not completely flooded to approximate their ordinary lives, attending work, school, and even social events.

The city’s response to the flood has to be viewed as a marked indicator of social progress and civic solidarity. Many alive during the flood harbored traumatic memories of the siege of Paris during the Franco-Prussian War in 1870. Widespread dissatisfaction with the national government after the French lost the war had led to a workers’ revolt and the brief establishment of a citywide commune, and survivors of those days well remembered the anarchic and unstable conditions of life as the communists’ citizen militias clashed with national defense forces.

In contrast, we see during the flood a sense of brotherhood in the face of adversity that prefigures the strong sense of French national identity often said to have emerged during the First World War a few years later. In fact, Jackson argues, the flood served as a sort of dress rehearsal for the war and such celebrated events of citywide mobilization as the Miracle at the Marne in 1914—when beleaguered French troops suddenly found themselves awash in reinforcements transported from Paris, in the absence of military vehicles, by 600 Parisian taxi cabs. Throughout much of the war, the city voluntarily went dark at ten o’clock each night to confuse German Zeppelins.

It was the now often overlooked incident of the flood, Jackson argues, that “allowed the Republic to deepend a myth of national unity in the years leading up to the Great War, even though the reality of French society was much more tumultuous and fractured.” The French themselves were, by the end of the flood, already mythologizing the event.

The moment the water began to ebb, on January 29, booklets of postcards displaying images of the flood were being sold in the street. The government created a special medal with the city’s Latin motto Fluctuat nec Murgitur (“She is tossed about by the waves and is not submerged”) to reward soldiers, firefighters, rescue workers, and civilians who had done meritorious work during the flood. It also led to a massive 120-million franc government relief effort in the aftermath of a catastrophe that had left more than 40,000 people unemployed—one of the biggest tests of the nation’s relatively new social welfare state.

The French did not dwell on what could have been done differently to prevent the flood. In fact the government acted without much hemming and hawing about public perception and responsibility—and in this respect there is a marked contrast between this story and the story of contemporary disasters like Hurricane Katrina in New Orleans. Jackson briefly notes, but does not belabor this parallel. A historian, he is hesitant to venture too far into more speculative territory, and, quite understandably, mainly aims to showcase the result of his thirteen years of research in Paris’ archives reconstructing the details of this most eventful week in one of the world’s great capitals.

The author does an excellent job not only on the aftermath and significance of the flood, but also on laying the necessary background to understand the state of Paris at the turn of the century, skillfully interweaving such complicated material as the 1870–71 siege and commune and Baron Haussmann’s redesign of the city in the 1890s into his narrative.

Paris is really his main character—there is even a companion website to the book that features many contemporary photographs and illustrations of the city. In addition to history and engineering buffs, the book will appeal to Francophiles hungry for more information about the city and readers of disaster narratives like historical disaster narratives like Gary Krist’s The White Cascade. about America’s deadliest avalanche, and Daniel James Brown’s Under a Flaming Sky, about an 1894 firestorm in the American Midwest.

At times, though, one wishes that Jackson’s focus were less panoramic. He alights briefly from time to time on characters who allow us a way into these large-scale events, people whose ideas and opinions we know something about—the ambitious but conscientious police prefect Lépine, and the soulful, humanistic poet Apollinaire are the most significant—but it feels like we lose touch with them each time as Jackson proceeds doggedly on to another anecdote from the next day or the next neighborhood.

Jackson has been recognized as a top young American historian within the academic world, but he does not yet have the strong feel for characters of historians who are also first-rate storytellers like Stephen Ambrose and Joseph Ellis. We learn by way of passing citations that Apollinaire, after leaving his home, has been covering the event as a journalist for the newspaper L’Intransigeant. But since Apollinaire was already a famous writer, and something of a controversial figure, whose erotic novel had been banned in 1907 and who had even been arrested on suspicion of stealing the Mona Lisa only three years before in 1911, his motives for doing this seem to merit a little more exploration.

The general absence of information about the city’s contemporary art and cultural scene, and whether the flood had any effect on the ongoing work of people like, for instance, Picasso, is understandable given Jackson’s focus on the hard facts of history. But it is still an absence felt by the culturally curious general reader. Jackson has recovered a crucial chapter of the city’s history that is bound to be folded into future popular histories of Paris. Until we have them, general readers who want a complete understanding of the French mindset at the turn of the century will want to turn to this book for coverage of this historic episode.