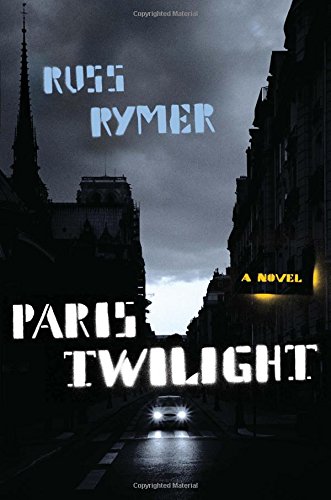 “. . . narrated in gorgeous, elegiac prose . . . a very enjoyable and strongly recommended read. . . . deserves to be nominated in the fiction category of book prize competitions.”

In Russ Rymer’s nearly brilliant debut novel Paris Twilight, 50-year-old American cardiac anesthesiologist and adoptee Mathilde Anselm describes how she came to Paris in 1990 in the months leading up to the first Gulf War, when the city was congested with huge anti-war demonstrations, to participate in a semi-secret heart transplant operation in a private hospital.

Then she begins falling in love with her patient Odile Sahran’s wealthy brother Emil, a fifth generation French citizen, businessman, and diplomat of Arab ancestry.

Following this she unexpectedly inherits a legacy that includes a studio apartment in a posh Parisian neighborhood from Byron Saxe, a man she’s never heard of, along with the correspondence of a Spanish Republican married couple—the husband, Carlos Landers, a refugee in France in the final months of the Spanish Civil War, and his wife Alba who was in Spain with the retreating Republican forces—which Mathilde is recruited to help American professional translator and political activist Corrie Bingham translate.

And all of this is narrated in gorgeous, elegiac prose denser than the previous three paragraphs, addressed to Daniel, the love of her life who died in Vietnam in 1964. In addition to the characters mentioned above the city of Paris is also a character.

Paris Twilight succeeds not just because of the beauty of its prose but also because of its complex plot and the way Mr. Rymer pulls the disparate storylines together in the end.

But that success is slightly diminished by a few implausible plot elements. One such element is that Matilde’s former surgical partner of many years Willem Madsen—a cardiac surgeon whose last operation with her landed him and Mathilde in court as opposing litigants—was able to convince her to let bygones be bygones and come to Paris to participate in a semi-clandestine heart operation.

Mr. Rymer waits until page 60 to have Mathilde question whether the donor heart will be acquired ethically. The other minor flaws cannot be revealed without spoiling an otherwise very enjoyable and strongly recommended read.

This is a book whose language is the bait and suspenseful story and characters the hook. Here is a sample sentence:

“So I finished my tea and dabbled at my dinner, and took a bath, and retired with a book whose secrets were guarded by my exhaustion, for almost immediately it lay open beside me on the duvet, and I woke after a while to turn off the light, and succumbed back into a dream that must have lasted most of the rest of the night, of swirling snow past a speeding train, a sensation of being unable to understand anything close by, of everything immediate flying past in a frenzy too fleet for me to grasp, while the trees and houses guarding the horizon stayed sharp and clear and precise to the eye, so that there were in the world only two things I was certain of: the feel of your hair beneath my palm, and the horizon, as patient and gradual and slow to pass as a thing remembered, even as it melted into distance and stillness and white.”

Readers who enjoy that kind of dense, stream of consciousness writing will probably enjoy this novel. Those for whom the text quoted above is a run-on sentence probably won’t. Mr. Rymer’s use of figurative language sometimes approaches but never quite crosses the line into purple prose.

This is as close to excessive as his metaphors get:

“The house on Île Saint-Louis was igneous, its windows ablaze as though it were being consumed from within by inferno. The orange heat blushed through the gray stone façade like smolders of magma in a lava field. The eruption came the instant the front door opened. Cacophony burst out, a hive of chatter fervent and indecipherable above the strains of a string quartet. I’d expected formal; I’d had no idea how grand.”

Paris Twilight is a novel rich not only in language, characters, and storylines traversing multiple decades, but one that addresses difficult questions about ethics, love, friendship, family, suicide, and history, and does not shy away from scientific references to anatomy and physiology.

In Mathilde Mr. Rymer inhabits and convincingly animates a psychologically complex and multidimensional female sensibility as well or better than more experienced male fiction writers. At the end of the novel she is enriched and bereft, still wounded and yet made whole.

This is Mr. Rymer’s third book and his first work of fiction. His first book was nominated for the National Book Critics Circle nonfiction award. Paris Twilight deserves to be nominated in the fiction category of book prize competitions.