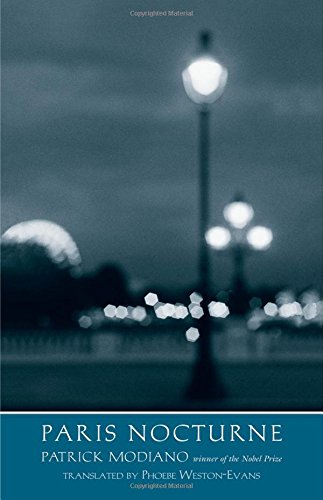 In the opening pages of Paris Nocturne, the nameless male narrator recalls a pivotal incident when he was a young man in which he was struck by a car crossing the Place de Pyramides in Paris. He hazily remembers a large man and blonde woman who accompany him in a van to the hospital and a mysterious clinic, their disappearance, and being given an envelope full of money. Throughout his narrative he tries to piece together what happened to him and find the people involved in the accident. The narrative jumps back and forth in time as the narrator tries to tie together and make sense of different memories and facets of his life.

Paris Nocturne has little plot and is largely about memory. The loner narrator wanders the streets and visits the cafes of Paris trying to connect his memories and experiences. Under the influence of ether and being disoriented from the accident, the unreliable narrator attempts to link the car accident and people involved to previous events in his life such as his unreliable, corrupt father, his dog being run over, getting arrested, and feeling lost and abandoned. The narrator’s wanderings coupled with his free associations, paranoia, and belief that everything in his life is related and significant give the story a dream-like, surreal feeling.

The narrator muses: “Whole sections of our lives end up slipping into oblivion and, sometimes, tiny little sequences in between as well. And on this strip of old film, spots of mould cause shifts in time and give the impression that two events occurring months apart took place simultaneously. How can any sense of chronology be established as we watch these truncated images scroll past before us, overlapping chaotically in our memories, or following one after the other, sometimes slowly, sometimes jolting, in the middle of blanks, It leaves my mind reeling.”

The narrator desperately wants to find order and meaning in his life. He wants answers about his childhood, his father, and the accident.  Determined to uncover the mysteries of his life, he asserts: “I was about to learn something important about myself that would perhaps change the course of my life.”

While he connects some pieces, and has a few questions answered, he discovers neither a grand conspiracy nor a master key to all of life’s mysteries. In this sense, Paris Nocturne is a faux noir novel. “Life is far simpler than you think,” the woman who hit him with her car tells him. And so Paris Nocturne concludes quietly, without great drama and suspense, but with human connection. The novel is simultaneously realistic and hallucinatory, suspenseful and calm, and finally, poignant.