Paris Never Leaves You: A Novel 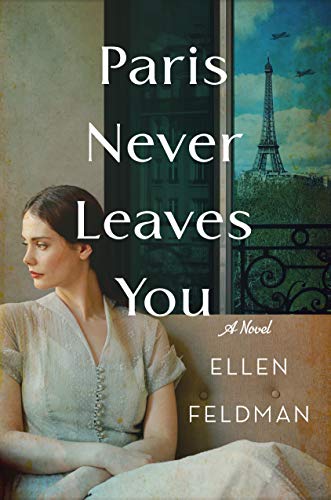 “A new entrant in the unlikely but burgeoning genre of Holocaust romance fiction . . .”

As a new entrant in the unlikely but burgeoning genre of Holocaust romance fiction, Paris Never Leaves You is a cut above the average thanks to the storytelling skill of its author, veteran historical novelist Ellen Feldman.

Thus, the book offers language a reader won’t trip over,  an enthralling plot with many melodramatic and obvious twists, and a real stunner toward the end, along with, unfortunately, the standard cardboard characters.

Charlotte Foret, the proprietor of a Parisian bookstore, gives birth to her daughter, Vivi, a day before the German army invades in 1940. For the next four years, survival means juggling shortages of food, soap, and morality.

One day, early in the Occupation, a tall man in a German army uniform enters the shop. “His fingers are long and slender,” and he has “black eyes set deep behind rimless glasses, and the long, ascetic face of a saint.”

The man, Julian Bauer, isn’t merely a tall German officer who loves literature and children. He is also a medical doctor. And he’s Jewish. (Yes, the genre can make a romantic hero even out of a Wehrmacht officer.)

Of course Julian and Charlotte tumble into a heart-throbbing affair. At first they fear that Charlotte and Vivi will be swept up in a Nazi raid, like Charlotte’s best friend. However, the bigger danger turns out to be the French Resistance, which marks Charlotte as a collabo horizontale—a woman who slept with the enemy.

The narrative toggles between the World War II story and Charlotte’s private war a decade later, when she and Vivi are living in New York City. An editor at a small literary publishing house, Charlotte is still wracked with guilt over her wartime affair.

Meanwhile, 14-year-old Vivi wants to know more about her father (who died early in the war) and the Jewish heritage that her mother doesn’t identity with.  She buys a menorah, then nearly sets their apartment on fire.

In the midst of this turmoil, a letter arrives from Julian, postmarked Bogota, Colombia.

Feldman, the author, tries to dress up the basic page-turning plot with discussions of morality. When Charlotte keeps insisting that “I collaborated with the enemy,” the owner of the publishing house retorts, “Is saying thank you to a German soldier who holds the door a betrayal of your country?”

Ultimately, however, such attempts at a higher theme fall flat, because both Charlotte and Horace Field, the publisher, are too exquisitely ethical to be believed.

Readers should simply enjoy this novel for what it is:  a good yarn with some well-drawn descriptions of Paris during the Nazi Occupation and the publishing life in the fifties.