The Paris Library: A Novel 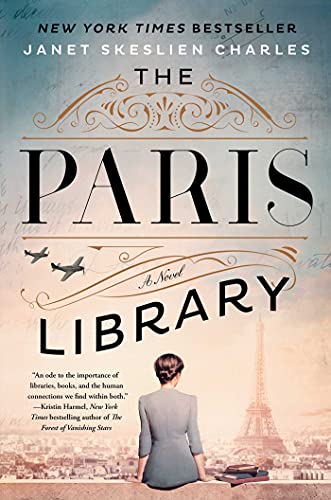 For the young Parisian Odile Souchet in the winter of 1939, working in the American Library in Paris sounds like her ideal job. After all, she loves to read, speaks fluent English, and has memorized the Dewey Decimal system for cataloguing library books.

In fact, her way of coping with strong emotions is to immediately relate her feelings to a book and its Dewey Decimal number. (An awkward luncheon with a would-be suitor? “841. A Season in Hell” by Rimbaud. Looming war with Germany? “Hard Times. 823. British literature.”)

Over the next five years, through the harsh Nazi Occupation of France, the ALP—which is an actual institution, founded in 1920-- also becomes the main source of Odile’s small joys. Fellow employees and clients of the private lending library are her closest confidants. She feels a frisson of pride at violating Nazi edicts, as she packs books to send to British and Jewish colleagues who are banned from the library building.

So how does Odile end up in the tiny town of Froid, Montana, some four decades later, a widow and near-recluse? “After living in Paris, how could she settle for this dull dot on the plains?” wonders Lily Jacobsen, the seventh grader who lives next door.

The answers unspool in this well-plotted and richly populated novel, primarily through Odile’s and Lily’s alternating, first-person narrations.

Inevitably, Odile’s story is more engrossing. Lily’s crush on a boy in her junior high school can’t compete with the Gestapo arresting one of Odile’s best friends. Even beyond the wartime drama, her ALP community—many of them true historical figures—are a wonderfully colorful lot. As Odile describes some of them to a dying American soldier whom she’s tending:

“There’s an Englishman—imagine a crane wearing a paisley bow tie. And his French friend—a walrus with a bushy mustache. Each day, they light a stinky cheroot and debate. Today’s topic: Proust’s madeleine, should it have been a croissant?”

Despite Odile’s and Lily’s many differences, their stories reveal unexpected similarities between the chic Parisienne bookworm and the conventional, small-town teenager. Both are too quick to blurt out criticisms, jeopardizing their closest friendships out of hurt and jealousy.

Surprisingly, it’s not little Froid, Montana, that ends up being a letdown, but rather the Nazi Occupation and the ALP’s Resistance work. Although Odile’s family and the library staff suffer from hunger and worry, they don’t really undergo tremendous hardship. The totality of the ALP’s anti-Nazi efforts seems to involve delivering books.

Listening to Odile’s stories, Lily fantasizes about Jews hidden in the library building. While that might not be historically accurate, this is a novel, after all. A little more drama would have made the Nazi horrors—and Odile’s dilemmas--more vivid.