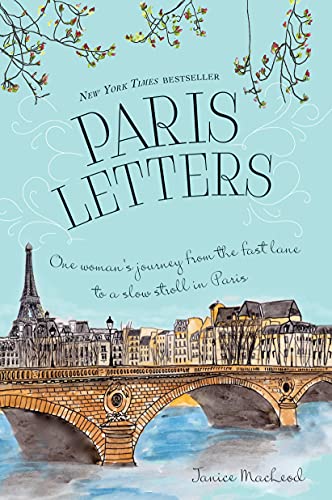 “MacLeod shows that with determination, focus, and the willingness to take risks, fairytales can actually come true.”

Janice MacLeod is the artist behind Paris Letters, a painted letter series she sends out to subscribers from Paris via snail mail. She is a former advertising copywriter and associate creative director for some of the top agencies throughout the USA and Canada as well as coauthor of two books, The Breakup Repair Kit and The Dating Repair Kit.

Paris Letters is a memoir about the author who spends a year journal writing and saving money to fulfill her dream of quitting her day job as a copy writer. By the end of the year and with a journal filled with 365 days of revelations, she has rid her life of all of her unwanted underwear, corporate attire, online dating subscriptions, financially toxic people, and eventually her furniture. When she waves good riddance to her bike and her car, it becomes evident to her family and friends that she has no plans of returning to Santa Monica.

Realizing that the ad agency's corporate walls were suffocating her soul, MacLeod boards a plane to Europe and doesn't look back. With a year ahead of being Europe bound and a tad more money than she initially planned on saving, MacLeod does what most want to do between high school and college—not once they've already embedded themselves in a successful career.

Within days of landing in Paris, Cupid catches her off guard and interrupts her travel plans when he places the handsome butcher, Christophe, in her path. After a few winks and smiles, the two soon learn there is a language barrier, but who needs the vernacular when you can use sign language and animated gestures? Revealing how simplicity in a relationship actually allows love to grow, MacLeod portrays falling in love as endearing, an honest and refreshing change from having to overcome drama and obstacles.

With funds dwindling from her savings, MacLeod finds a way to create art and earn money so she can lengthen her stay abroad. Through her Paris Letters to subscribers, she draws scenes from the most romantic city in the world and captivates readers with clever and crafty notes that complement her art.

The memoir is written as though to best friend telling her story over lattes—or café crème. Relatable and inspiring, MacLeod makes following your dreams look easy. While the story is told with places of simplicity, it is also cleverly crafted with wit and unexpected wisdom. Because of this, it is almost a relief that there is little drama and few major obstacles to overcome in the romance, the worst being their language barrier.

Just enough references to literary greats and artists who graced the streets and homes of Paris add a nice balance to the story, showing her inspiration for her Paris Letters. Additionally balancing are references to the historical charm and the darker sides of Paris.

MacLeod shows that with determination, focus, and the willingness to take risks, fairytales can actually come true.