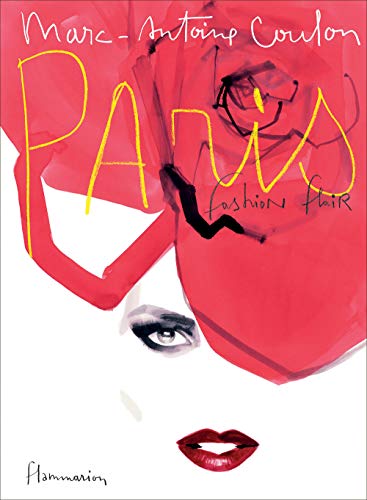 Paris: Fashion Flair is ostensibly about the talent and artistry of its author, Marc-Antoine Coulon, as well as about French fashion. There is so much more to the book than just those two elements as it is most certainly a love letter to the city of Paris and its iconography.

The educated fashion reader as well as the aficionado of fashion illustration will take note that even though there are similarities and influences of Rene Gruau and possibly David Downton, Tony Viramontes or even Joe Eula, Coulon might be deemed a minimalist in his approach to illustration. His artistry is all about the positive and negative space and how he uses them to their utmost advantage while possessing this almost unfathomable ability to capture much more than just a likeness of his subject with seemingly the least amount of effort. (Think less is more.) That in of itself is a talent that few possess as it is a photographic approach in conveying the subject’s likeness and delving beyond just the surface image. The artist’s instinct provides the viewer with a depth that might not be seen in the work of others.

On a strictly visual level the book is glorious. There is quite literally no text other than the foreword so that Paris: Fashion Flair can be solely assessed by the images that are presented, which are a cut above what we are generally exposed to here in the USA. This is a book for lovers of fashion in any of its many iterations.

Marc-Antoine Coulon is the next generation of fashion illustrators and portraitists. In case you have never heard his name, it is entirely possible you have seen his work in Vanity Fair, Vogue, Town & Country, Elle, and many more publications including his weekly contributions to Madame Figaro in France. He has also been the subject of a one man show of his works that took place from September 14, 2018 to February 10, 2019 at the SCAD FASH Museum of Fashion & Film in Atlanta. Then there is his exclusive affiliation with Cartier.

It would not be presumptuous to believe this will be the first of several books documenting his ongoing and extensive oeuvre stretching beyond just fashion.