The Paris Children: A Novel of World War 2 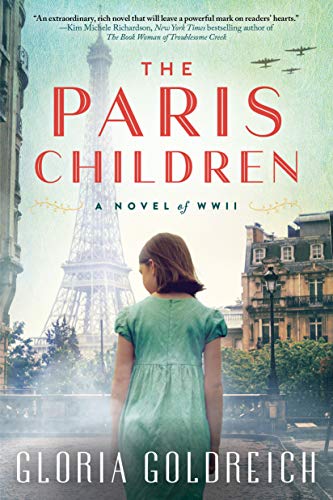 “The Paris Children is a page-turning and inspiring story of how courage and family ties can survive even the worst of evil.”

What would it have been like to be a granddaughter of Alfred Dreyfus, the Jewish-French army captain who was falsely convicted of treason in 1894 in a notorious trial based on a forgery, caught up in a tide of virulent anti-Semitism, and finally exonerated 12 years later?

Few books ever look at the repercussions of such injustice on the victims’ families. Luckily for readers, award-winning author Gloria Goldreich takes that unusual path in her new novel The Paris Children, by focusing on Dreyfus’s granddaughter Madeleine Levy. While this is a fictionalized treatment, the basic story is true and dramatic in its own right: The real Madeleine Levy risked her life saving Jewish children during the Nazi occupation of France.

“History repeats itself,” Dreyfus’s widow, Lucie, tells Madeleine and her sister, Simone, as she explains why she is now using a false last name. “Alfred is dead, but the Vichy [French] Fascists will persecute all who bear his name.”

As the novel begins, with Alfred Dreyfus’s death in 1935, l’Affaire Dreyfus seems to have faded from controversy. Madeleine’s father is a respected physician, and her family lives in upper-middle-class comfort in Paris.

Their world is ripped apart less than five years later, when France surrenders to Hitler’s troops. The Nazi occupation unleashes among their French neighbors the same furious anti-Semitism that had once tried to destroy Alfred Dreyfus and never disappeared.

Madeleine, Simone, and their two brothers join the Resistance, with different functions. As a newly minted social worker and a member of the Éclaireurs Israélites de France, or Jewish French Scouts, Madeleine, then age 22, is assigned to rescue Jewish children and eventually help smuggle them to Palestine—somehow.

One of her first jobs seems rather trivial: organizing schooling and recreation for the children of slave laborers at a factory near Paris.

But the work grows increasingly dangerous, especially as the Nazi crackdown intensifies. Within three years, Madeleine is coordinating detonations of bridges and German ammunition dumps and preparing to lead a clandestine escape over the Pyrenees to Spain.

On top of constant fear for the safety of her family and her Resistance boyfriend, Claude, Madeleine faces a personal terror: Her partial deafness, a result of scarlet fever when she was eight years old, is worsening. “How much time did she have, she wondered, before she would be surrounded forever by a wall of silence?”

Among the best parts of this novel are the practical details of Resistance operations. To make forged passports, for instance, “Lactic acid erased blue ink. Rubber stamps were scraped and pierced with the tines of a fork, then pressed onto pads of ink that had been blanched so that their imprints on documents were faded to an impressive authenticity.”

More important, the book shows the complexity of the French attitude toward their German invaders. Far too many French people collaborated, whether out of greed, fear, or their own hatred of Jews. Yet, as Madeleine’s brother-in-law Serge reminds her, “Not all of France is complicit. There are [Charles] de Gaulle, the Free French [the government-in-exile led by de Gaulle], the Resistance.”

A few historical slipups mar the author’s research. Madeleine and Claude know too much about Auschwitz too early to be believable. Yet at that same time, in 1941, despite their supposed knowledge of this Nazi brutality, they are surprisingly naïve about dining in a café in Nazi-occupied Paris while wearing the obligatory yellow Jewish stars.

Overall, however, The Paris Children is a page-turning and inspiring story of how courage and family ties can survive even the worst of evil. Madeleine Levy deserves this celebration.