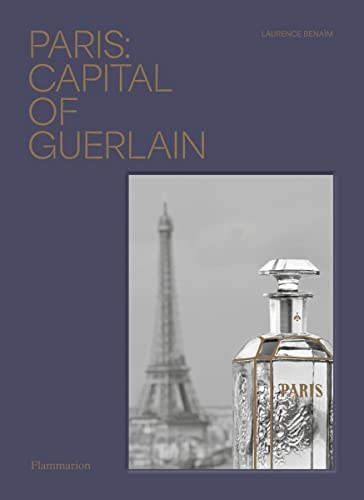 Within this genre of fashion monographs, heritage brands are usually associated with clothing or jewelry. Laurence Benaim has flung the door open on one of the greatest names in the business of scent. Paris: Capital of Guerlain might just be the first tome to be devoted to a heritage name tied to the olfactory senses and to a master perfumer.

Benaiim tirelessly and meticulously researches, and in doing so has been able to intertwine the histories of both the Guerlain family and the city of Paris by providing references of the sociological aspects of the times to the art and upheavals of the eras starting in the 18th century. She meshes it all together, making this volume “sound” as if it might be a fairy tale when in fact it is all true.

“Guerlain condensed the distinctive features of an entire civilization into the auras of fragrances.”

Most readers will instantly free-associate the Guerlain name with scent, but this is not the case at all. In the beginning the brand was also known for skin whitening creams, powders, a variety of soaps, and the world’s very first lipstick. The Guerlain family was a family of innovators and prescient businesspersons who felt the pulse of the times and moved accordingly.

“Never before had a perfumer been as closely associated with haute couture as was Guerlain. He personified the fashions, passions and whimsies of his world.”

That being said, the Guerlains were very much interested in the art of personalization and custom design from bottles to stoppers to labels. This is the kind of attention to detail that brought the perfumer into prominence and kept it there for over three centuries. There are not many, if any, heritage brands who can boast of such longevity or prestigious renown.

The exquisitely rendered tome should be part of all fashion libraries as there is much to be learned and remembered from Benaiim’s exhaustive research, which encompasses so much more than just the Guerlain family and their brand.