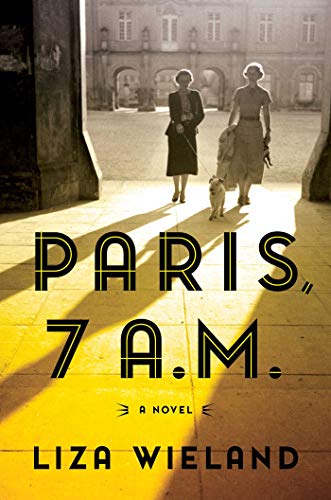 “the language of Paris, 7 A.M. is better than the narrative. It is sharp, evocative, and true to Bishop’s style of picking out details of the physical world.”

As befits a poet like its protagonist, the former U.S. poet laureate Elizabeth Bishop, Paris, 7 A.M. is more of a sensory scene than a novel, a beautiful coming-of-age tale that takes place primarily in Bishop’s mind.

It is certainly not a typical historical novel, despite a Holocaust-related subplot.

Newly graduated from Vassar College, the Bishop of this book wafts through the 1937 Parisian literary world, frustrated by writer’s block, still half-closeted as a lesbian, guilt-ridden over the suicide of a young man who wanted to marry her, and terrified of her growing alcoholism. If she goes by herself to catch her train, “she will not even make it out of the bar at the train station. . . . She will raise glass after glass, beguiled by suitcases tucked under tables, the alert gaiety of travelers, their eyes glazed here in the place between home and destination.”

Meanwhile, most of the people in Bishop’s circle refuse to acknowledge the looming shadow of war with Nazi Germany, which will in fact break out less than 30 months later. “And so Elizabeth begins to hear it too, below everything. The gathering war. It is so often the shallow breathing of metal.”

Then, about two-thirds of the way through the book, author Liza Wieland whips out an imagined subplot that was her chief inspiration yet that seems awkwardly pasted onto this exploration of moods: A friend asks Elizabeth to help rescue some Jewish babies from Belgium.

Wieland—who is a poet, an award-winning novelist, an English professor at East Carolina University, and a scholar of Bishop’s works—has said that she invented the rescue subplot to fill in a gap in Bishop’s diary. Otherwise, much of the book is based on true aspects of Bishop’s life, including her sojourn in Paris and some of her friendships. The book’s title is also the title of one of Bishop’s poems.

The end result is an odd hybrid that almost works.

The subplot adds new dimensions to the very private Bishop, whose poems are precise and vivid but not personal. This fictional Bishop becomes more and more scared of the Nazis and feels an abrupt love for the rescued babies that amazes her.

To ratchet up the complexity, Bishop (in this book) is drawn to Sigrid, a young woman who works at the German embassy in Paris yet who seems to have serious doubts about her Nazi employer.

The problem is that Wieland’s inventions are significantly contrary to the character of the real Bishop, who was not known for any interest in either children or political activism. So the novel will not actually give readers any insight into the poet. Wieland might have done better by simply creating an original heroine from scratch, but she clearly wanted to pay homage to Bishop, who was the subject of her PhD dissertation.

Happily, the language of Paris, 7 A.M. is better than the narrative. It is sharp, evocative, and true to Bishop’s style of picking out details of the physical world. A friend’s messy room is “like a village in winter, a blur of life and color clustered beside and between snowy fields . . . The desks are wild floating islands, mountainous with books, with flotillas of pencils and pens cruising about the shallows.” The water in a river is “ruffling like upturned petticoats, like the edges of oysters.”

As well, this novel perceptively explores Bishop’s inner turmoil as she increasingly views the world around her with a poet’s eye even while despairing that she will ever be a poet. “The poems take too long to write—the lines, each word, each letter comes with excruciating slowness. All day long, she sits at the window and watches the courtship of doves . . . Spots on their backs like inkblots, like all those missteps in every poem.”

Maybe someday someone else will write more about those rescued babies.