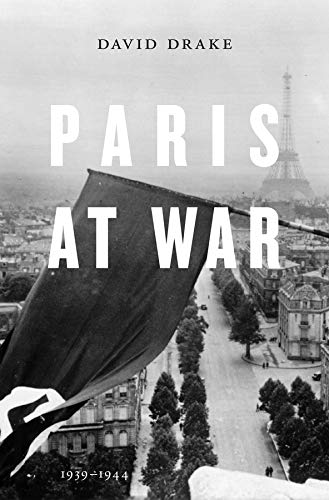 Those who are members of groups that have historically been subject to discrimination and even genocide—religious, ethnic, and racial minorities—may contemplate how they would react were their worst fears realized. What would they do if their lives were suddenly subject to the arbitrary rule of tyrants who would use them as scapegoats for a nation’s troubles? Would they take up arms and fight for their survival? Would they quietly collaborate, if they could, in the hope that the worst would not occur and that the political rhetoric would pass?

David Drake has crafted from real history the stories of how the everyday men and women behaved during the Nazi Occupation of Paris from 1940–1944. Although the French have revised their own history to recast all Parisians as heroes who staunchly resisted the Nazis, the actual narrative is decidedly darker.

France’s army had crumpled before the advance of the German troops who would occupy Paris for four years without much opposition. The French people acted in disarray at the approach of the German army. Millions fled Paris and ultimately it was declared an open city to avoid its destruction. Foolish, unprepared, stunned, shamed, passive, and confused, the country folded.

France was divided into two sectors, one ruled by the Nazis, the other by the Vichy “government,” pawns of the occupiers. The Germans sought to play the role of courteous friends to the Parisians, blaming their betrayal on the English and the Jews.

The capture of the French soul was complete, and the Parisians became subservient. Many collaborated with the occupiers, including the press. Within a few months of occupation, however, life in Paris became exceedingly difficult, with food and fuel shortages, unpredictable deportations, and arbitrary edicts. Only the rich could afford the prices charged on the black market. For others, their days were filled standing on endless queues for rationed foodstuffs.

The primary targets of the Nazi occupiers were French Jews, at least until Hitler abrogated his accord with the Soviets and attacked Russia in June 1941. Then the well-entrenched communists of Paris were freed by their Moscow handlers to attack the German occupiers. The ideologically-driven communists would prove the most resilient resisters to German rule, but there would be a heavy price to pay. A series of assassinations of German officials and troops led to retaliatory executions of “hostages” held by the Nazis.

Drake creditably relates the political encounters within both the German and the Resistance camps normally motivated by personalities and the allure of power.  Alliances within both groups shifted with the winds. The Resistance, however, did not pose a significant threat to the occupiers until the Allies marched east towards Paris.

For day-to-day Parisians, the most compelling challenge was to find food to eat and clothes to wear; however, for French Jews, most of whom lived in Paris, German occupation led to a steady diminishing of economic and political rights, pillaging of their homes and property, and ultimately to deportation first to a French transit camp and then to the Auschwitz death camp in Poland where they were immediately murdered.

For most Parisians, the life-and-death struggles of the Jews were not a top priority.  Their long national history of anti-Semitism blossomed anew. At best, they were indifferent to the fate of their Jewish countrymen, although a few brave souls did hide Jews from the Nazi death machine.

In general, however, the French did not distinguish themselves during the Occupation, and, as Drake points out, most of the Germans’ dirty work was carried out by the French police until ultimately the SS entered the theater to finish the job. Parisians survived the best they could—as resistors, collaborators, black marketeers, and ordinary Frenchmen. Their stories present a mixed picture of courage, complicity and greed – all human traits brought out by the worst of circumstances.

Drake’s account of the Occupation makes effective use of recently translated diaries and letters of ordinary people intertwined with historical accounts. It reads as a scholarly book phrased in lyric prose. We know how the story ends with De Gaulle’s Free French troops liberating Paris to keep the Communists at bay. Ultimately, France emerged from the tyranny with more pride than it deserved.

What then can we learn from the French experience? The Nazis had plainly warned about their intentions regarding the Jews. Perhaps we should take people at their word when their words are frightening. The Germans methodically implemented their plan, first requiring all Jews to register as “security threats” in order to later facilitate their deportation. Then Jews were compelled to wear yellow stars. Finally, the roundups began.

Should we be concerned when leading American politicians call for the registration of all Muslims in the United States? The monitoring of all mosques? Barring all Muslims from entering the country? Turning to other “enemies,” how should we react to labeling Hispanics as drug importers and rapists? Or the proposed roundup of millions of undocumented Hispanic aliens and deporting them back to the countries from which they fled? Or ridiculing disabled reporters and women who speak up and speak out?  None of this could actually happen, could it?