The Paratrooper Generals: Matthew Ridgway, Maxwell Taylor, and the American Airborne from D-Day through Normandy 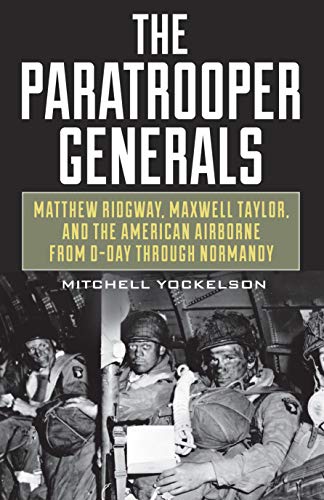 “this is the first book to look at the commanders who led these elite troops in the most crucial operation of the European Theater. As such, it is can be either an excellent introductory volume or supplementary look at the men who lead the paratroopers who dropped into the roof of Hitler’s Fortress Europe.”

The introduction of airborne troops in World War II was one of the more significant military innovations of the war. The men chosen to lead these new units were also unique individuals with a maverick and independent streak. In this volume, Mr. Yockelson describes the battlefield experiences of two of America’s most famous airborne commanders during the Normandy campaign.

Generals Matthew Ridgway and Maxwell Taylor, like other American generals in the pre-war Army, were introduced to the concept of airborne infantry by the early successes of the German military using paratroopers in Norway and Holland in 1940. When the new Army Chief of Staff, General George Marshall, determined the U.S. needed a parachute infantry capability, he called on some of the officers whose careers he had followed during those lean interwar years.

One of those men was Matthew Ridgway, who with a group of inventive Army officers had to create not only the tactics and doctrine for using these new types of infantry, but design the training course, acquire parachutes and aircraft to conduct the training, and then get jump qualified themselves—all of which occurred in the shadow of Pearl Harbor and the desire to get these new troops into action as soon as possible.

Leading the 82nd Airborne in combat during both the invasions of Sicily and Italy in 1943, Ridgeway gains valuable experience in the hazards of nighttime parachute drops and leading scattered groups of paratroopers to secure critical objectives that help guide his planning for the division in the Normandy invasion.

Maxwell Taylor was one of the new airborne officers that secured rapid advancement, acquiring combat experience in the 82nd Airborne during their operations is Sicily and gaining additional experience on an unsuccessful secret mission to Italy in 1943 to secure the surrender and cooperation of the post-Mussolini Italian government.

When the command of the new 101st Airborne division becomes vacant in February 1944, Taylor, serving as Ridgway’s de facto assistant commander and chief of staff, is chosen by Eisenhower to take over command of the division. As both divisions complete a rigorous pre-invasion training regimen, an internal debate rages in the Allied high command on the utility and potential cost of using the two divisions in the upcoming invasion, with some predictions of 60–70% casualties during the first few days of combat.

But Eisenhower is convinced of the necessity of the divisions to seize key objectives and protect the flank of the invasion force, and although the 82nd Airborne’s drop zones are hastily changed right before the invasion, both divisions accomplish most of their D-Day objectives and continue in combat for almost six weeks after the invasion, led from the front by Generals Ridgeway and Taylor.

The author writes a compelling battlefield narrative, but at times the reader is taken on a zigzag journey down a number of side narratives concerning topics such as the training of parachuting war correspondents and the origins of the DC-3 aircraft that become the famous C-47 transport.

The actual combat portion of the book does not really get going until almost halfway through the book and at times it seems like the book shifts from biography to command study to division history. Nonetheless, the author shows just how confusing the fighting was for the units as paratroopers found themselves often scattered miles from their intended drop zones and how the crucial leadership of these division commanders and their subordinates was to organizing the scattered groups of men into coherent fighting units that were able to accomplish their key assigned objectives.

There have been numerous memoirs, unit histories, and battlefield narratives covering the histories of these storied units in World War II, but this is the first book to look at the commanders who led these elite troops in the most crucial operation of the European Theater. As such, it is can be either an excellent introductory volume or supplementary look at the men who lead the paratroopers who dropped into the roof of Hitler’s Fortress Europe.