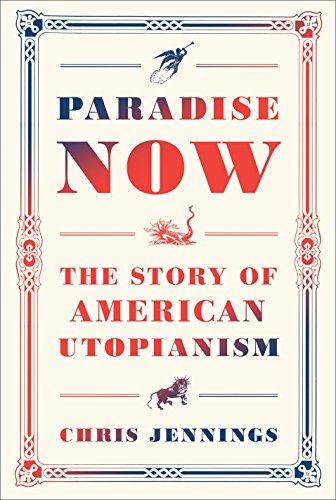 “a book not only fascinating but necessary for these trying times.”

On the 19th of May 1780 “darkness spread across the [New England] sky.” The war for American independence was in its fifth year, and “gardens went unplanted and the wheat grew thin.” These conditions made the countryside ripe for a different kind of revolution.

In the Hudson Valley “a hotbed for royalist counterrevolution,” the Shakers made their home in Niskeyuna, New York. The Shakers would become one of the numerous religious groups that would flourish in the Second Great Awakening. The spiritual revivalism combined with the political and industrial revolutions sweeping the North American continent. They formed a volatile cocktail for radical thought and utopian thinking. Paradise Now: The Story of American Utopianism by Chris Jennings chronicles the rise and fall of a particular mindset.

The Second Great Awakening occurred roughly from the 1790s to the 1820s. It coincided almost exactly with the first American Industrial Revolution. During that time textile mills dotted New England. Cottage industries expanded into manufacturing.

A rough, vulgar, inebriated, and violent mood dominated the country, culminating in Andrew Jackson’s election. Religious democratization ran a parallel path with political democratization. Citizen empowerment melded with an evangelical spirit and technological innovation. With enough hard work and personal optimism, a New Jerusalem could be created on the American continent.

Industrialization brought newfound wealth, but not spiritual fulfillment. As textile mills ground down workers, revival meetings swelled with enthusiastic attendees. Amid these revivals different groups sought respite in utopian communities. Mr. Jennings writes, “Today, we have ample reason to recoil from such visions. Many of the darkest episodes of the twentieth century—the Thousand-Year Reich, Soviet gulags, the Khmer killing fields—were born of utopian and millenarian ideologies.”

But in the 17th and 18th centuries, the benefits of science combined with religious thinking. They combined into the attitude that humanity could build a rational paradise on earth. New Jerusalem would have the steam engine and locomotive. All problems would be solved and everyone could live in harmony. Paradise Now reveals what happens when idealistic thinking meets the rock hard realities of financing and feeding an intentional community.

Jennings profiles five groups: the Shakers, New Harmony, the Fourierist phalanxes, Icaria, and Oneida. Each community believed it would create a new society so happy, healthy, and productive even outsiders would find it appealing enough to create momentum for a worldwide movement. Most burned out quickly or were ravaged by economic privation. Others collapsed amid internal squabbles.

Written in a jaunty casual style, Paradise Now offers five alternative visions for how to live. The Shakers adhered to a rigorous work schedule combined with sexual abstinence. The Oneida practiced a version of free love while espousing their vision of “Bible Communism.” Fourierists took their inspiration from the crackpot visionary Charles Fourier. The Fourierist phalanx had its own version of sexual freedom within Fourier’s mania for taxonomy.

Icaria remains the most obscure group profiled. It is based upon a utopian French novel called Travels in Icaria by Étienne Cabet. One fascinating historical nugget relating to the Icarians is how they settled in Nauvoo, Illinois, shortly after the Mormons were run out. While the Mormons eventually fled to Utah, the Icarians ended up in Texas. After decades of persecution and isolation, the Mormons transitioned into a legitimate world religion. The Icarians faded into obscurity. Unfortunately, Jennings doesn’t spend much time on the Mormons, since it could be seen as a case study for a utopian community that succeeded and flourished.

Jennings balances a breathless, sometimes jocular narrative of events against the very real prejudices of the time period. With the exception of Mother Ann’s Shakers, women were restricted from any leadership position in these utopian groups. Membership and leadership remained white, male, and heterosexual. Despite the economic and spiritual radicalism, it only went so far.

Paradise Now is a wonderful popular history on the interlinked topics of religious communitarianism and utopian communism. When dissatisfied with mainline faith and the depredations related to urban industrialization, these five groups sought to create something different. All failed to some degree, but each presents an educational opportunity for those seeking alternatives to life’s general awfulness. It is a book not only fascinating but necessary for these trying times.