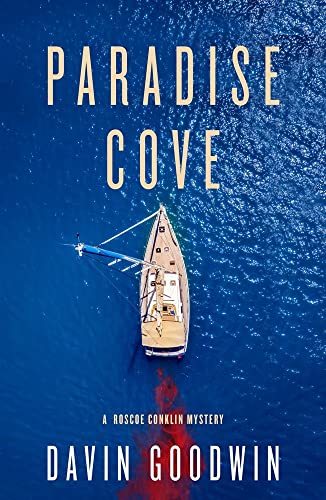 Roscoe Conklin, (R to his friends) retired from the Rockford, IL, police department, has settled into a new life on Bonaire, a small Caribbean Island. His life is full—he owns Yellow Rock Resort, a small tourist inn; he’s in love with Arabella, the local police detective, he enjoys diving, and he’s got his pilot’s license.

Life is good—or is it?

Goodwin draws the reader into the story with an opening scene on a boat where a body is being dismembered and dumped into the sea. A rather grisly scene to say the least.

In chapter two the reader learns about Roscoe’s background and then the ball drops. While enjoying a sunny day on the beach, R finds a human leg washed up on the shore, and he is suddenly drawn back into police work when it is learned that the leg belonged to Rulio, the nephew of Erika, R’s business secretary.

Although R has no authority, his history speaks to his ability to provide insight into crimes such as this, and although he is not supposed to investigate, for the benefit of Erika and to satisfy his own curiosity, he dives in headfirst.

Approached by Inspector Schleper, the Chief of Police, R’s calendar suddenly begins to fill up when the inspector hires R to investigate his wife’s activities. Schleper suspects Tessa is having an affair. R agrees to help if the inspector will give him information on the Rulio investigation.

Putting a tail on Tessa is easy work, but discovering her activities runs to multiple men and puts R in an uncomfortable situation. Learning that a shady man, Lucas, who works for John and Denise Anderson, owners of Paradise Cove (a large restaurant and resort), is one of Tessa’s lovers isn’t bad enough, but when he learns that his good friend, Chuck, has also fallen head over heels for Tessa, problems start to surface.

Now, while the situation is a strong one and moves the story forward, Goodwin may have made an error. Bonaire is a small island, and the wife of the Inspector would certainly be familiar to the small population; Goodwin makes no excuses for her being unfamiliar to these men.

Goodwin does a good job of tying the two investigations together and these two situations give the story deep dimension.

Goodwin’s cast of characters is solid and well developed. John Anderson is developing Paradise Cove into a large resort area; his wife, Denise is the social butterfly who keeps the customers happy. Lucas, their bartender, and John’s best friend, is portrayed as an unsavory character with a murky background, who will defend John and Denise to the end.

Goodwin paints Arabella’s relationship with R as strong, yet careful. Chuck, R’s best friend, is not in Arabella’s good graces and when Tessa is found dead, Chuck rises to the top of Arabella’s list of guilty candidates. She soon is drawn between her investigation of Rulio’s death and keeping R in check.

Tie into these two deaths the fact that Chuck, a pilot, is dragged into a mess of picking up mysterious packages for John and Denise, and the story takes a dark turn when a local thug appears to have a connection but ends up murdered himself. Can the story get any more complex for R?

Goodwin uses R’s professional background with the police, to show he is capable of discerning what direction his investigations are taking and how each situation begins to tighten the story.

Paradise Cove has lots of twists and turns, and Goodwin throws many blocks in R’s path, but R is a strong character and capable of moving over, under, and around each blockade to a successful end. It’s a good read and well paced.