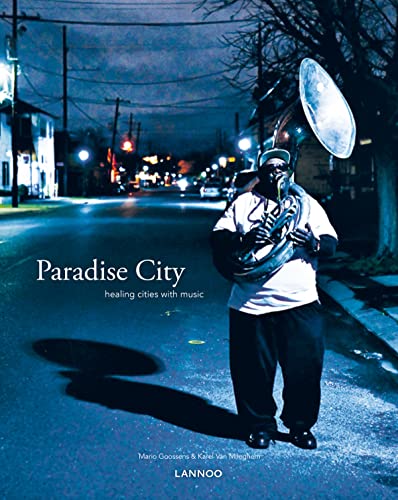 “This book’s strongest message is one of hope. Rising out of devastation, these cities prove that local people, particularly artists and musicians, have the ability to create unity and beauty.”

“Music heals.” Though that’s a simple statement; each of us likely has a felt sense of its truth.

Paradise City: Healing Cities with Music begins with that unpretentious phrase, “Music heals.” Through its pages, the book showcases the work of 22 musicians in six cities who use the power of music to uplift and inspire. In addition to the stories, the book has impressive photographs. It is a striking publication.

Paradise City is a large, heavy volume. On its cover is a blue/black image of a man playing a horn as he walks down a nighttime street. The immediate feel one gets from the book is being led by song to emerge from darkness into light. For those with a passion for music, this book will be compelling from the start.

The six cities highlighted are Port-au-Prince, Belfast, New Orleans, Kigali, Hiroshima, and Detroit. Each of these cities has had tremendous difficulties and may or may not have received the necessary external support required to recover. In each of the 22 stories, the musicians share how they have worked locally to bring recovery to their towns.

Being artistically and politically engaged can often be dangerous, sometimes life-threatening. In Belfast during “The Troubles,” going to the record store was an act of personal defiance, suggests a member of the band Therapy?. In Haiti, Zikiki St. Eloi felt threatened by gang violence, so much so that music lessons for children using music to overcome trauma sometimes had to be canceled out of safety concerns. In situations like these, playing music and singing become acts of bravery.

While each of the stories is truly moving, Marie Lacey’s perhaps most exemplifies the need for long-term, grassroots, artistic projects in a city. Marie’s best friend was shot in front of her. This experience galvanized her desire to do something positive in her community. In 2009, many years after the official end of “The Troubles,” she formed the Belfast Community Gospel Choir, the only multicultural choir in Northern Ireland. This choir not only has Catholic and Protestant members, but also people from many races, religions, and places of origin have auditioned.

What is it like to be a refugee, hunted for your ethnicity? Jack B., a Tutsi from Kigali, recalls his experience in refugee camps and daily fear for his life. Jack used dance to uplift himself when he was young, copying Michael Jackson. He’d like to write a book about his experiences, but because he was unable to attend school, believes his “vocabulary is inadequate.” Instead, he uses music to express his feelings. He’s had some “modest R&B hits in Rwanda.”

“Economic and sociological factors ruined Detroit,” a city that declared bankruptcy in 2013. Yet no one would ever deny the greatness of the music that came from and continues to be created in that city. Motown’s influence can still be felt. Modern-day hip hop and rap performers use the power of story and language to share their experience with the world, and sometimes free themselves from the traumatic effects of poverty and hopelessness.

The stories in Paradise City are enlivened by the remarkable photography in this book. The images from every city can be awe-inspiring. Hiroshima is difficult to look upon. The juxtaposition of recollections of past horrors with the beautiful artistry of the Japanese is haunting. Tadakata Yanagawa, pictured in his coffee bar, shares about how music disappeared from his city after the bombing. “Eventually [he] gathered some cultured people, and together, they established the International Cultural Association of Hiroshima.” Without the unassuming image of an elderly man in his place of business, this tale would feel like a footnote in history. Instead, because story is combined with a photograph, it provides a powerful message about resiliency.

This book’s strongest message is one of hope. Rising out of devastation, these cities prove that local people, particularly artists and musicians, have the ability to create unity and beauty.

Paradise City: Healing Cities with Music is an exceptional and relatable volume that deserves attention. It is a beautiful gift for anyone who loves music or needs a little faith in humanity.