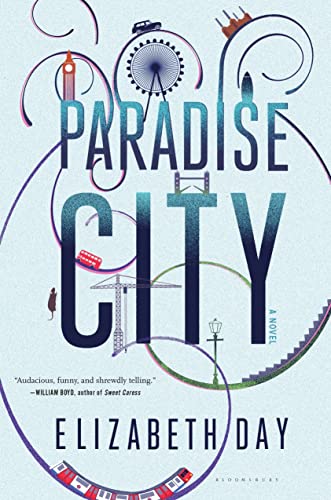 Simply put, Paradise City is a good, old-fashioned read. With an engrossing plot and a comfortable writing style that can “float through the traffic like a boat pushing off from a riverbank” (as one character describes his luxury car), it follows the paths of four Londoners so different from each other that the reader eagerly flips the pages to learn how they will intersect.

The ride can sometimes go off-course. The plot requires one forced, overly dramatic coincidence and trails off too limply at the end, and there are a few weak characters. Overall, though, the book gallops ahead happily with a mix of insight, humor, and occasional stabs of deeper emotion.

One of the four key characters, Esme Read, is almost a younger version of the author, Elizabeth Day. While Day, 37, is an award-winning novelist and feature writer for The Observer, a Sunday newspaper in London, Esme is an ambitious but fledgling 30-year-old reporter at the Sunday Tribune in London with a lukewarm crush on her editor.

Esme soon bags a big scoop: an interview with Sir Howard Pink, another of the central figures. Invariably described as a “self-made millionaire,” Howard amassed those millions by transforming his immigrant mother’s clothing stall into a fashion empire called Paradiso Group; however, Howard is haunted by the still-unexplained disappearance of his daughter Ada at age 19, 11 years ago.

As the book opens, in a scene reminiscent of the 2011 Dominique Strauss-Kahn scandal, Howard rapes Beatrice Kizza, a lesbian refugee from Uganda who works as a chambermaid in the posh London hotel where Howard often stays. Unlike in the Strauss-Kahn case, however, Howard tries to make amends by hiring Beatrice in a secretarial job at his company—if she agrees never to tell anyone about the rape.

The fourth main character, Carol Hetherington, is a 63-year-old grandmother and housewife mourning the recent death of her longtime husband, Derek, from prostate cancer. The contrived plot pivot connects her with the other three.

In addition to the page-turning narrative, one of the pleasures of reading this novel is teasing out the similarities and patterns shared by the protagonists beneath their obvious differences. For instance, all have lost a person they love. Howard and Esme are deeply insecure, while Carol and Beatrice discover hidden strengths. Esme’s tense but loving relationship with her mother parallels that of Carol and her grown daughter.

Some of the main and secondary characters are delineated with more complexity than others. Beatrice is the most original and intriguing. Howard has enough humanity to escape becoming a cliché—the tycoon who, inside, is really “the pale, spotty, knock-kneed boy from Stepney,” a London slum. But his narcissistic, silicone-breasted, gold-digging wife is a totally unbelievable caricature. And Carol, whiny and self-centered, is just boring.

Every now and then, author Day slips out of her breezy tone to open a window into Howard’s raw, gut-deep agony over Ada. “He thought about the fact that every tiny molecule, each plaited strand of genetic material, every minuscule hereditary quirk bequeathed by generations of Pinks whom Ada had never known—all of it, which had together created the infinitesimal subtlety of what his daughter was—had been shattered into a million scraps of absence.”

Those occasional insights add depth to what is already a solid story.