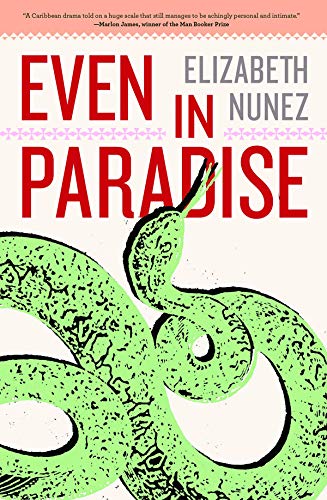 Elizabeth Nunez’s latest novel, a retelling of the tragedy King Lear set against a contemporary Caribbean landscape, takes place on the islands of Jamaica, Barbados, and Trinidad, exactly the kind of venues where one wants to have a good beach book in hand. That is not to diminish her very readable tale, but it is does serve to convey that the book is not exactly in the literary canon of replayed great stories.

In Nunez’s hands, King Lear appears in the form of widower Peter Duckworth, born and raised in Trinidad but descended from British colonizers. His three daughters, Glynis (Goneril), Rebecca (Regan), and Corinne (Cordelia) mirror the sisters in Shakespeare’s most famous tragedy.

Glynis and Rebecca scheme to profit from their bequeathed assets and vie for their father’s affection while sweet, smart, honest Corinne, the youngest, struggles to reassure her dad that she really does love him—so much so that when her sisters try to deprive her of her future inheritance, their father’s house, she hardly objects on her own behalf and fights only to keep their father living out his days in the home he loves.

This selfless act is likely to strike some readers as a flaw in the plot. More troublesome perhaps is the fact that Glynis’s fiancé, Albert (Albany), an otherwise savvy, kind, astute young man is so smitten with the nasty Glynis (a Caribbean Cruella de Ville) that he turns into mush at her every evil turn and tongue lash. Alas, Rebecca is stereotypically dull while Corinne is predictably lovely in every respect.

That aside, the story does deal with major themes found in Shakespeare’s classic, if not as deeply, for example, as Jane Smiley’s retelling, A Thousand Acres. There is love, both romantic and filial, guilt, betrayal, chaos, reconciliation, power, and more, with sprinkles of historical fact dropped in for added Caribbean context.

An interesting element brought to bear in Nunez’s rendition is the interplay of contemporary cultural practices and prejudices among the various ethnic groups that people the story, including Africans, Indians, and Lebanese. Class and race play a pivotal role in events and relationships and how both are perceived. For example, when Corinne insists on tutoring children in an impoverished Jamaican neighborhood, fears for her life are raised; when she, a white woman, falls in love with Emile, the story’s black narrator, eyebrows are also raised.

In short, Nunez has written a very readable, and in its own way, engaging novel that deals with big themes worthy of good storytelling. Her novel may not be as deep, tragic, or well-developed as Shakespeare’s, but then whose could? Take it to the beach and enjoy the human flaws it exposes. Then revisit King Lear to see why some tales remain timeless.