On Paper: The Everything of Its Two-Thousand-Year History 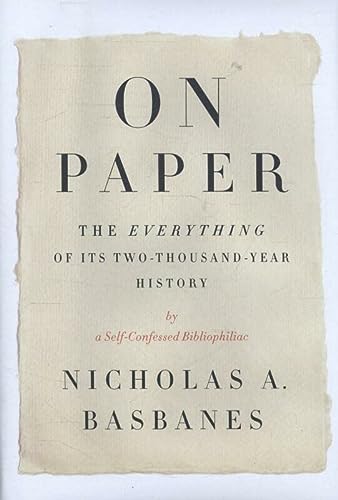 While the digital age certainly reduced our use of paper, for many the tactile love of paper grows. The history of paper reflects less on nostalgia, and more on an appreciation of this marvelous invention that changed the world.

Mr. Nicholas A. Basbanes has traced and documented the riches of his topic in this story of history, mystery, ingenuity, and progress—an extremely compelling subject.

By the 18th century paper was made in mills throughout Europe and beginning production in North America. Not unlike the changes brought about by the Internet in the 20th century, paper offered a medium of cultural transmission. It was supple, convenient, inexpensive, highly mobile, simple to make, and suited to hundreds of applications beyond writing.
Simple to make, that is, unless you were an artisan making paper by hand.

The story begins in Old China. In the autumn of 2007 Mr. Basbanes and a small group of paper historians traveled to the remote section of southwestern China to see how the phenomenon of papermaking began and how it continues to be made in much the same way as it was 2,000 years ago. The author enlightens us about the complex development of paper and describes both the rugged journey and the people he met along the legendary Silk Road.

Before paper existed, knowledge was written on bamboo and silk or engraved on metal and stone. Papyrus also had versatile properties in daily life as far back as fifth century BCE. In fact, out of necessity, the part of papyrus sheets that were not used for paper could be roasted and consumed as food.

After the invention of paper in China, the concept eventually made its way westward across the Silk Road and eastward to Korea and Japan, mostly conveyed by Buddhist monks.

The need for paper as a writing surface was urgent. Mr. Basbanes’ research indicated the use of paper in Japan for printing and writing, window glass, handkerchiefs, clothing, and lamp wicks. As recently as 1912 the government determined there were over 68,000 workshops actively making paper in Japan, sometimes as seasonal work for farmers after the rice crops were in.

By the fifth and sixth centuries, paper gave way to the concept of using characters on paper to convey meaning. This was an art that would not die, not even in today’s Internet age. In 2009 a research scientist at University of Iowa, Timothy D. Barrett, was awarded a $500,000 fellowship for his efforts over three decades to document and preserve centuries of old hand-papermaking practices that might have been otherwise lost.

Paper was quickly adopted to replace other materials. People no longer had to record details of religious, literary, artistic, social, and personal business on cumbersome materials or on expensive silk.

The demand for paper is so great that these time-honored methods of making paper are threatened with extinction as paper mills run by global industrial giants fill modern demand needs. Crane Paper Mill in Massachusetts, for example, is where all the paper for American currency is made.

One wonders how any author can sustain interest in a subject we take for granted, but On Paper continues to strike an emotional cord as Mr. Basbanes digs up information on the value paper has held in the life of Japanese artists and writers. “The Japanese have found in their paper a vehicle for the entire range of human expression, from the most noble, religious, and artistic manifestations to the most common, everyday thought.”

Much of the romance of this lovely book comes from the author’s efforts to observe the process of making paper by hand. Along the way we learn of world cultures through history and religion including the impact of paper in the Islamic world by the 14th century. Europe would later experiment with making paper from logs, rags, vegetable fibers, straw, and even wasps’ nests.

The colorful history in On Paper holds the reader’s interest both for the topic and the speedy walk through the centuries. Paper moved into mass production in time for the invention of metal type, developed in Europe. The task of manufacturing for Western use including steps not used in the past, such as shredding pulping, rolling, molding, sizing, and drying. There was also a high cost of equipment, and a skilled labor force needed. The first U.S. English-language printing press was installed in 1639, in Cambridge, MA.

Once the newspaper industry took hold, with a volume of newsprint used by American newspapers rising from 106.8 mill pounds to 670.9 mill between 1880 and 1890 there was no turning back from developing fast, quality printing techniques.

By 1937 the United States was using as much paper as the rest of the world combined, leading to the need for forestry management programs. In 1852 Salt Lake City was home to the first paper mill west of the Rocky Mountains, and just four years later a mill opened on the Pacific coast near San Rafael, CA.

There can be little doubt about the important role of paper today both in personal hygiene and in commercial and industrial uses. Tools for reading and writing may have changed with recent advances in technology, but the amazing life stories in On Paper are as impressive of the lives of the people who dedicated themselves to this advance thousands of years ago.

Unique uses such as the drawings of Leonardo da Vinci, the archetypical Renaissance man, give the world a record of how the artist “thought on paper.” On Paper covers the astonishing accumulation of da Vinci papers, after his death in 1519. While what survived is only about 20 percent of his works, without paper we would have none.

Architecture also owes its success to paper. Paper’s role in architecture began back in 1500, allowing unprecedented advancements in design and construction. Before paper, sites including majestic temples and cathedrals were designed not by drawing and erasing on paper, but with poles and ropes moved back and forth on the ground.

Beyond the fascinating history the author is drawn to the idea of paper, for it is a marvel of both medium and message, a tool both flexible and functional.

A lover of the printed word will surely choose to read On Paper in a print edition, although a digital edition is available. Here’s guessing that an ebook will likely leave you longing for the feel of paper as you read this remarkable story.